Warning: Use of undefined constant ’64M’ - assumed '’64M’' (this will throw an Error in a future version of PHP) in /home/valgen/public_html/nomadicdecoratorcom/wp-config.php on line 89
 Holey-Moley Holi Color | Nomadic Decorator
Skip to content

Here in Chicago they make our river run green round about now, for St. Patrick’s Day. But what’s spectacular about that? It’s only one color. I’m far more interested in the explosion of Holi colors happening now! Want some?

If you haven’t heard of it yet, Holi is a Hindu festival in India that’s full of fun and frolic and the throwing of bright colored powders and colored water.

With all the color and action and the spectacular visual spectacle of the event, naturally it’s a draw for photographers. How do they get so close but keep their lenses clear of powder? 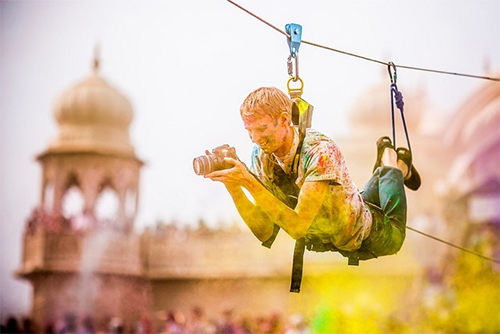 Some year I must be in India for Holi! But it’s not celebrated only there. It’s becoming more common in college towns. Maybe it’s becoming like the newest Burning Man or Coachella – an event for younger folks to see and be seen at.

I say it that way – for younger folks – because I’d dearly love to crash a Holi party at a college campus! But as a 40-something, that would be really ridiculous now. I try to imagine a Holi party on my street and all the 40- and 50-somethings in my neighborhood whooping it up and throwing powder and turning all technicolor. Makes me giggle. Because we are conformed into being so corporate and careful at this age, would anyone do it? But anyone of any age can participate in India without looking ridiculous.

If you don’t want color thrown all over you, you can still throw some color all over your dining table for some fun! I did a guest post for masalamommas.com all about using bright Holi colors in your dining room – check it out!