It was spotted at Hobby Lobby – a red chippy paint chalkboard menu. I have no need and no place for a chalkboard menu every day. But it could be a good occasional decoration for a dinner party or holiday meal. So I wanted to “DIY it” on the cheap. Here’s the finished DIY chalkboard menu: 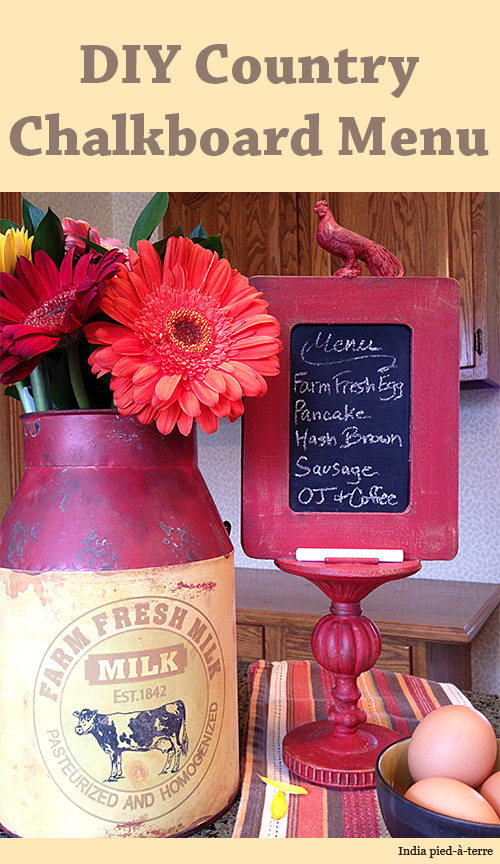 Breaking the menu down into its parts, it’s very easy to put together yourself. Here’s the supplies (some I already had):

All supplies passed inspection by Chaai the Crafty Cat. From the bottom-up, the menu is built with:

Before I continue, you’re going to see some lack of continuity in the photos here. Because I tend to break things: 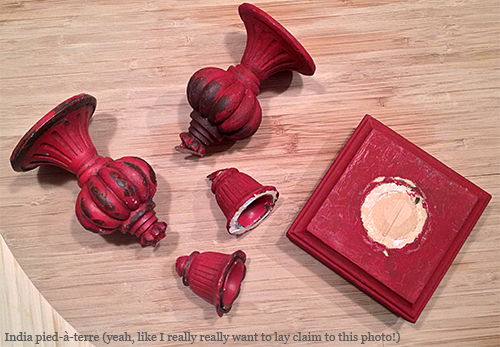 Yeah, two candlesticks fell over and broke! After that I decided not to try again with this candlestick style, and got a different one instead. The base of the new candlestick was too wide for the wood base you’ll see below, so that’s why a wood base is not in the final photo/finished project.

So here’s the first steps: 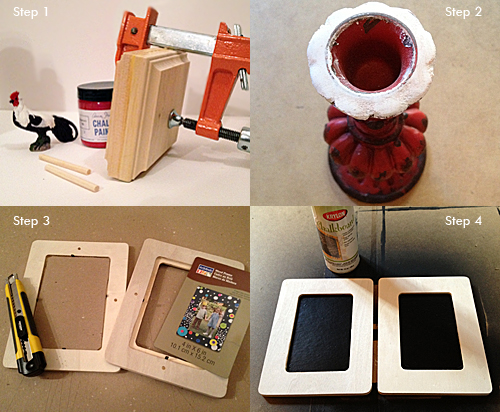 See how using the candleholder upside down gives more surface for gluing the frames. This gives more stability because there will be pressure while writing and cleaning the chalkboards: 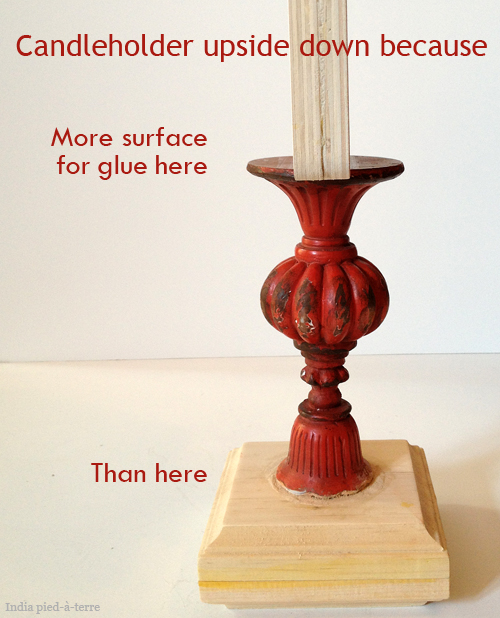 The frames came with tiny wood dowels. I wanted to cut a dowel to hold chalk in place. But looking at the options around here … there was a chainsaw … and there were  Xacto knives. Nothing in between that’s just right! It’s like the Cinderella story of tools around here. So I hacked at a dowel with a kitchen knife. After that chop job and sanding, I glued the dowel to the candleholder, leaving space to hold chalk: 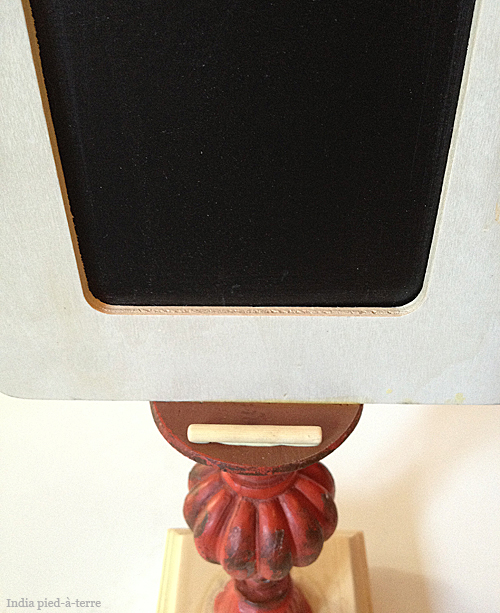 Then I glued a lightweight plastic rooster to the top of the frame. Because the Hobby Lobby menu had a rooster there. So I guess I was stuck on the idea that a rooster must be there. It’s better than other plastic animal options at craft stores: tiger, dragon, pterodactyl … those are not exactly charming. Our menu shouldn’t include animals that would eat us. But hey if pterodactyl is your style, go for it. A rhinestone skull? Go for it! I should have been more unique! There was a turkey at Michaels – perfect for a Thanksgiving menu.

Now this whole assembly looks so weird, right? Like a Franken-menu: 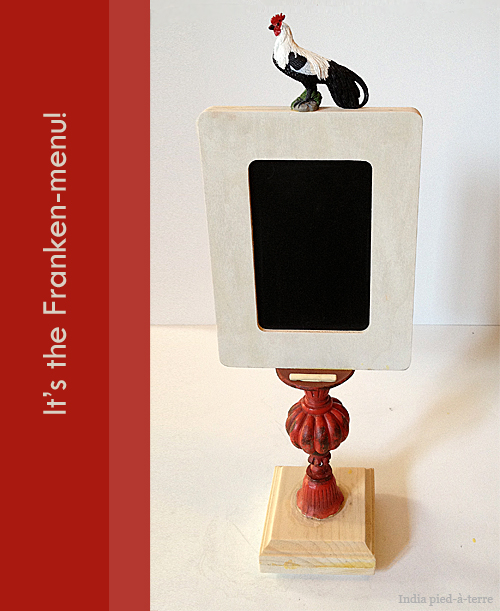 What if I stopped here, and said “wow, isn’t this great looking!” You’d tell me honestly what you think, wouldn’t you?

We’ll fix this so it looks good. This was very simple to do with paint. I painted two coats of Annie Sloan Emperor’s Silk chalk paint. Then I dry-brushed brown and ochre colors of acrylic paint to make distressed highlights here ‘n there. 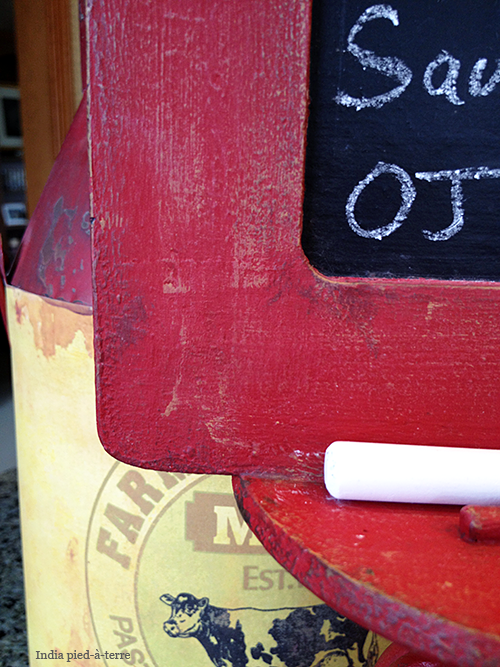 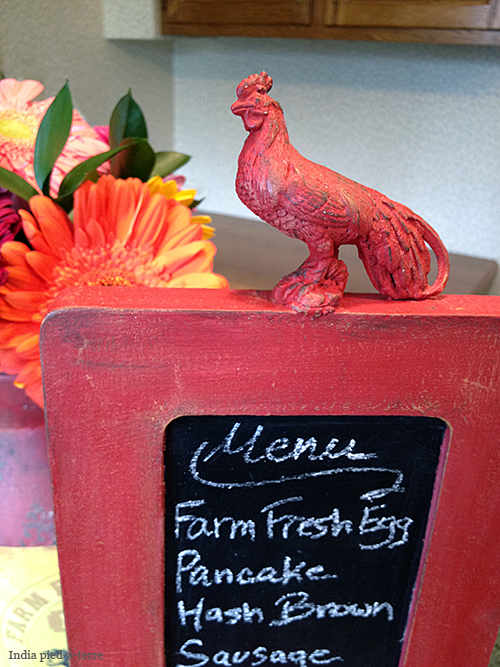 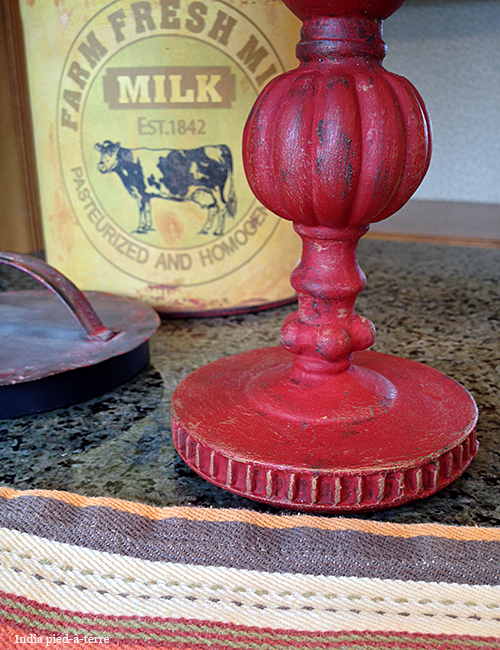 Finally, to protect the chalk paint, I buffed the red painted areas with Annie Sloan clear soft wax. Obviously you don’t want to put wax on the chalkboard paint.

And here you have it, a chalkboard menu! 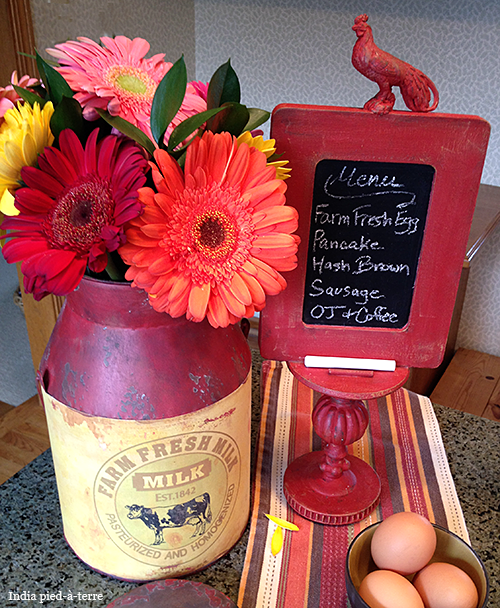 Isn’t this something to crow about?