Warning: Use of undefined constant ’64M’ - assumed '’64M’' (this will throw an Error in a future version of PHP) in /home/valgen/public_html/nomadicdecoratorcom/wp-config.php on line 89
 DIY Chinese Chair Makeover with Leopard Print Suede & Paperclay | Nomadic Decorator
Skip to content

For a recent Throwback Thursday post, I shared a story about the time the wrong chairs were shipped to us from Thailand. Why would we go furniture shopping in Thailand and risk such things? Because we love style from Asia: Thai, Burmese, Chinese, Japanese. They have it all there in a village called Baan Tawai. A woman working in a very upscale mall in Bangkok actually told us about Baan Tawai. We must have looked shocked at the prices of antiques in her store, because she told us: “Go to Baan Tawai. Looks like this but new. Cheap-cheap-cheap.” So to Baan Tawai we went. (And from now on forevermore, whenever we talk about something cheap, we have to say three times, “cheap-cheap-cheap.“)

These are crates of furniture from Thailand that arrived in our garage eight years ago: 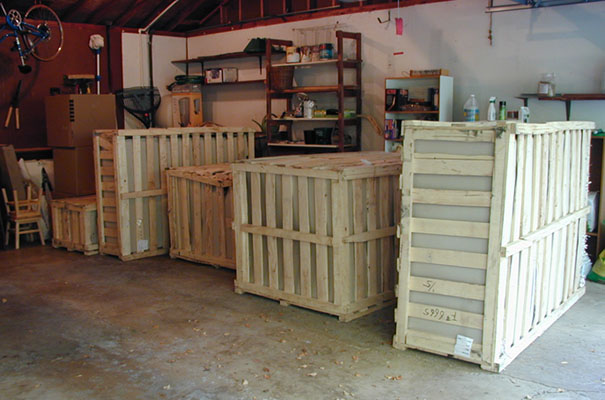 When we opened them, we were thrilled with nearly everything, except two Chinese style chairs we expected weren’t there. The chairs we received had interesting features:

If you sat on the cushions with bare legs on a hot day, the plastic made you sweat and the cushions would stick to you when you stood up. Nice!

You might ask, why not ship them back? Each chair was fifty bucks. Not worth the cost to ship them around the planet again. And because I could do a makeover, we didn’t want to quarrel about a refund. It was our mistake to not give the shipping consolidator a better description of our purchase. Lesson learned! Mark your purchases and give pictures to the shipper.

Pretty self explanatory! Good thing, because there are no photos of the spray painting. Which also means there are no “before” pics. This was so long ago, it was before this blog and the obsessive photographing of everything that happens when you blog.

Remove the sticky plastic from the cushions and recover them with leopard patterned suede. Yeah!!! While you might not think of “leopard” and “Chinese chair” in the same sentence any more than you’d think “grapevine” and “Chinese chair,” I’m likin’ the leopard. So does Chaai the Crafty Cat and because he supervises every DIY here, he has lots of experience to know these things. 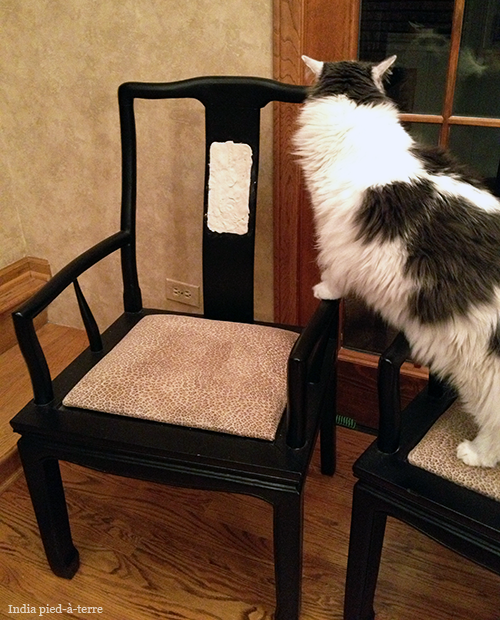 Recovering the cushions was a big improvement. But the grapevine carvings still had to go. The backs of the chairs are curved, so I struggled with how to fix this area. 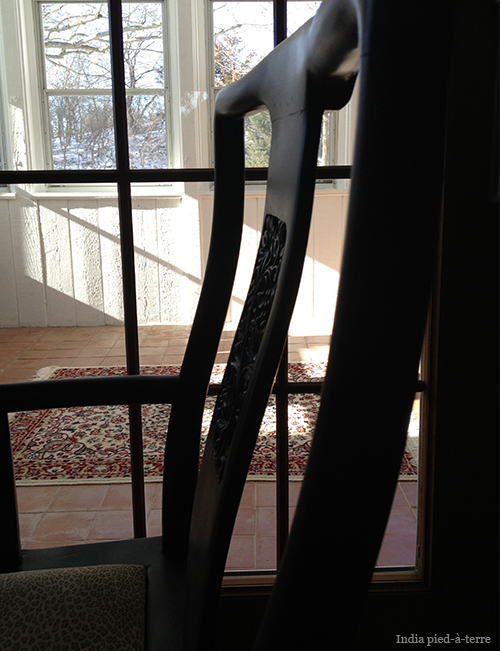 The first attempt to fix it, when I started writing this post way back in September 2011 (!!!), was to “upholster” the carved area with orange tiger striped suede.

I thought the leopard and tiger combo would make a cool “Chinese safari” effect. And for sure, I’d strike design fame and fortune with this innovative style mash-up!

Instead it looked just like what it was — tiger striped rectangles taped on the back of a chair, trying desperately to hide something. I could only imagine what HGTV Design Star judges would say about this tiger print band-aid: 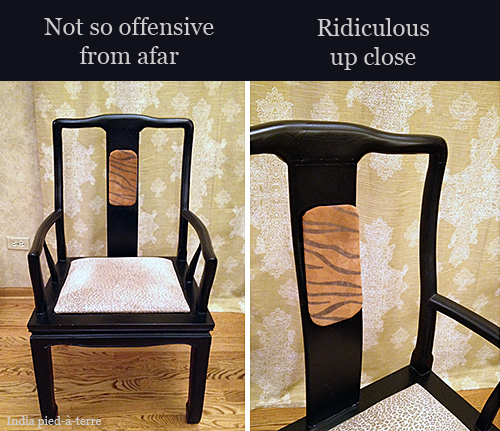 Then during an insomnia-fueled brainstorm — because the most creative problem-solving happens for me at 2 a.m. — it hit. Sculpey! Why not fill the carvings with Sculpey? Then sand it smooth? I probably saw something Sculpey’d on Pinterest a few hours before that. That’s how this subconscious problem-solving works, you know.

So I sought out the Sculpey, and then found it must be oven-dried. Hmmm. I don’t know much about Sculpey but one thing I do know:  These chairs aren’t going in the oven.

Thankfully nearby there was this stuff called Paperclay with magic words on the package: air dry. Really? I gave it a try … 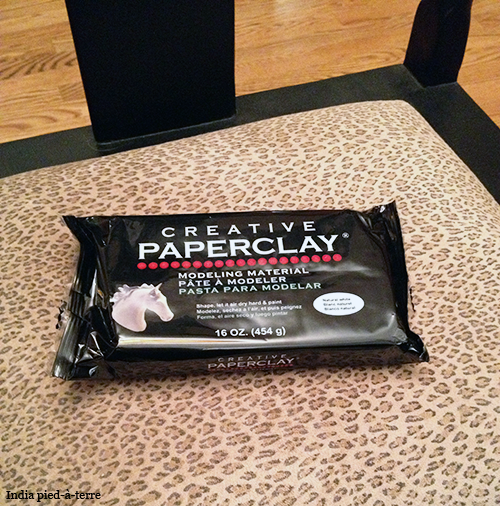 I smoooooshed Paperclay into all the nooks and crannies of the grapevines: 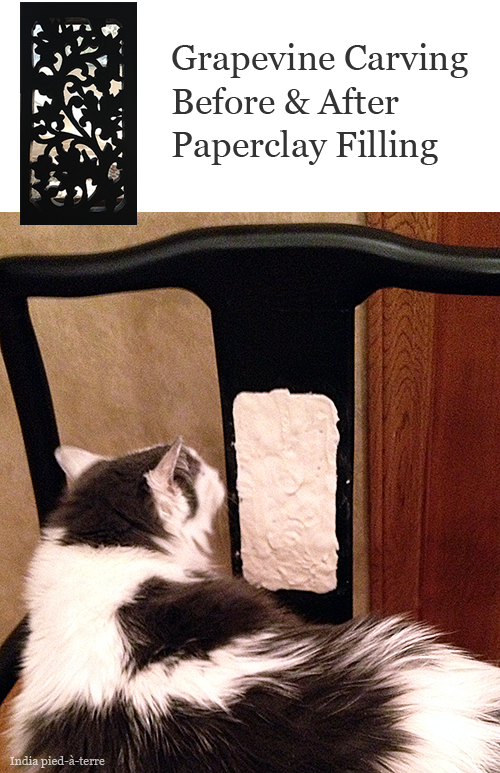 I Googled Paperclay and found you can sand it and sculpt it after it dries. So I didn’t worry about making it perfectly smooth yet. Just smoooooosh it in there.

Let it dry overnight. I couldn’t get back to the chairs for a week. That’s fine. The Paperclay was dry. I sanded with a block. I don’t know the grit, but it was a coarser sanding block.

Sanding made a mess. If you sand this stuff, be forewarned. 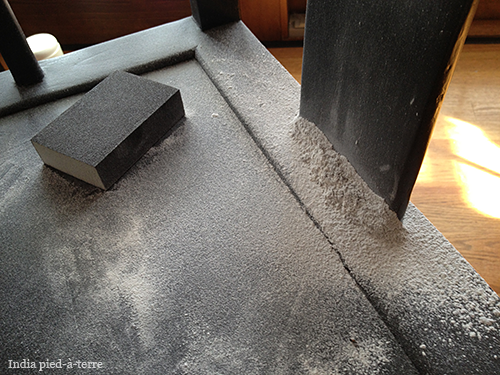 After sanding the Paperclay, there was still a lot of unevenness. See: 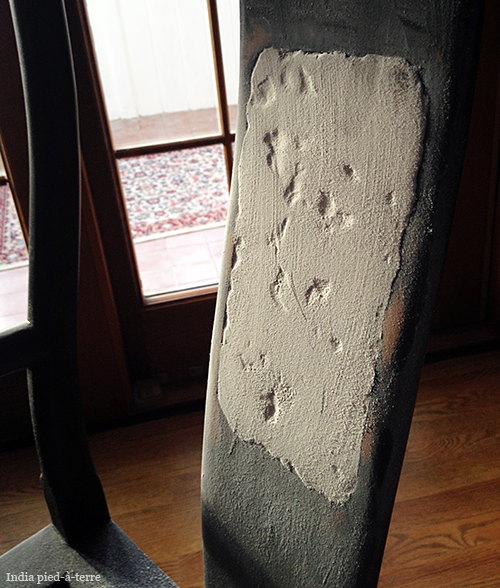 While Googling, I found Paperclay can shrink and crack a bit while drying. No worries. You just smooooooooosh some fresh wet Paperclay in any cracks or uneven areas, and let that dry. It will stick to the first layer of Paperclay. Then sand it again: 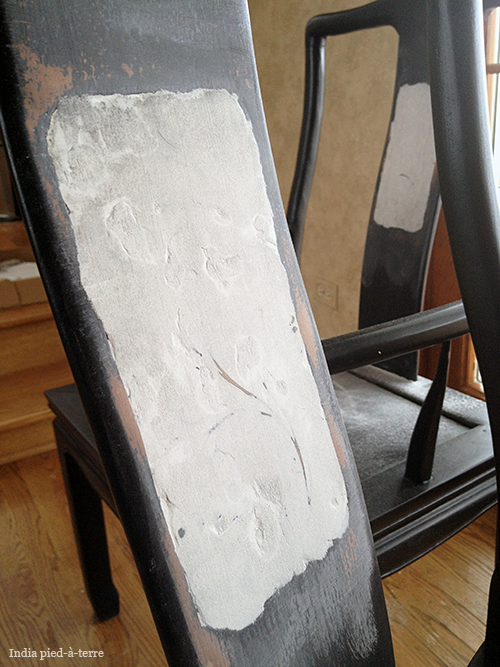 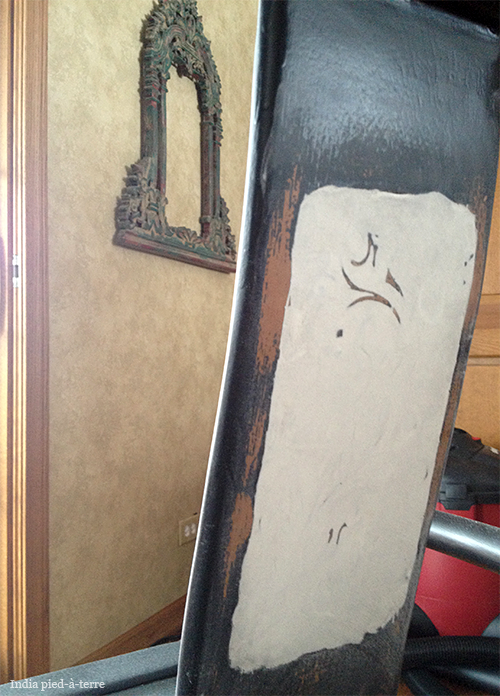 You can see after this second round of smooshing and sanding, the finish is more even.

I’m not 100% happy with the finish. Ideally the “Paperclayed” area should be so smooth, it looks like nothing was ever carved in the wood. I don’t know if I’ll achieve that perfectionistic ideal. Now that we have a decent orbital sander with a vacuum, I might do another round of filling and sanding.

Also the Paperclay absorbs more paint than the finished wood around it. It probably needs to be sealed so you don’t get this weird two-tone effect: 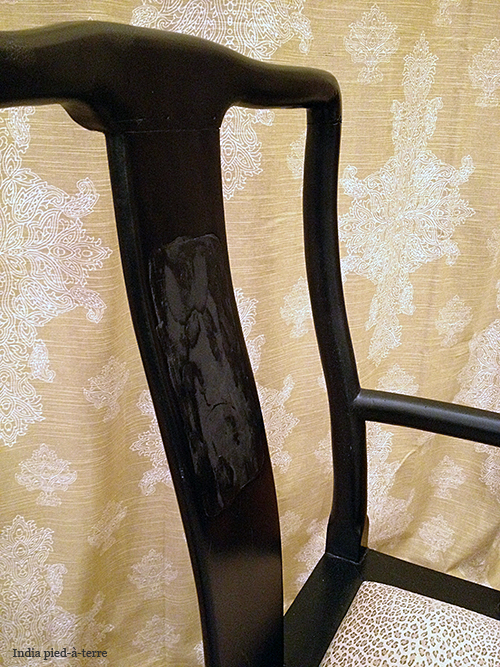 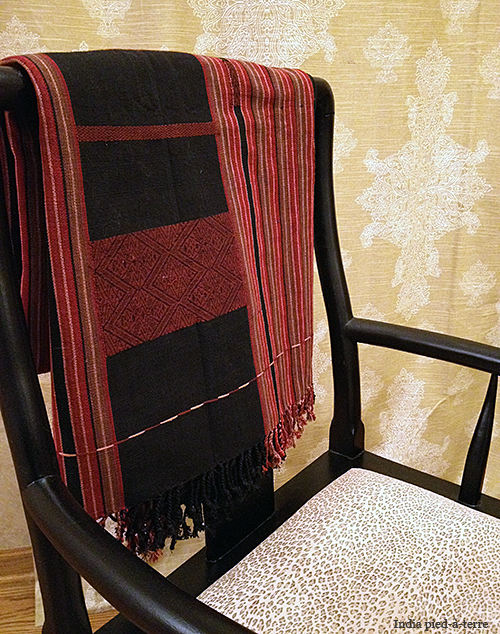 STEP 6. Throw textiles over the backs

Isn’t it easier to hide a mess than to fix it? Of course! Yes as a child I was the kid who, when mom told us to clean our room, I shoved my toys under the bed and called it clean. Some things never change. So, I draped some throws over the chairs: 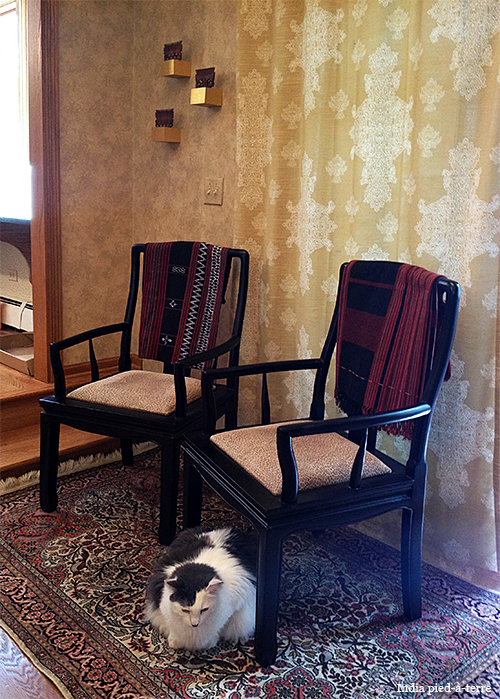 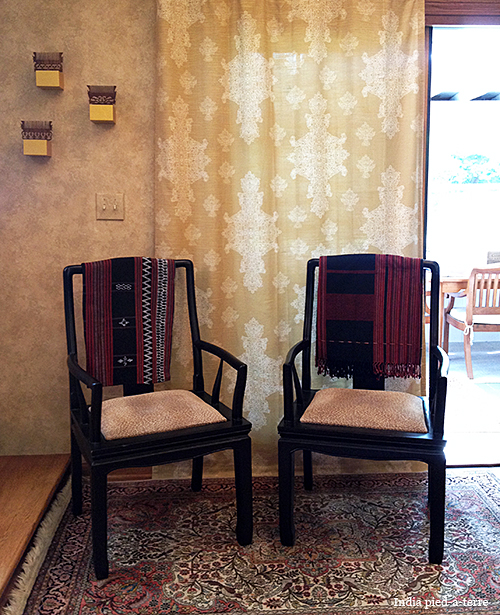 The rug is silk (so luxurious for your feet!) that my husband got at auction many years ago. Back in the ’90s before we even met. The curtains behind the chairs are damask print curtains from Target. The things hanging on the walls are carved wooden combs found in India, and I DIY’d cute little museum style display shelves for them.

To round out this global style corner, I’m on the hunt for a small side table to put between the chairs. I can see a little Syrian/Moroccan/Indian inlay table here, something with some pattern on it.