A few years ago, I was “gifted” with an ’80s throwback — a mauve fabric covered ottoman. It needed a major makeover. I found a pricey Missoni zig-zag ottoman that gave inspiration for a makeover. Because if you show me 10 things, I’ll pick out the most expensive, no fail!

Following the inspiration photo, the ottoman should have geometric pointy shapes. That made me think of the Tribal Stencil from Royal Design Studios’ Raven + Lily stencil collection. I have it in the small furniture size which is a perfect size to fit on a typical ottoman. 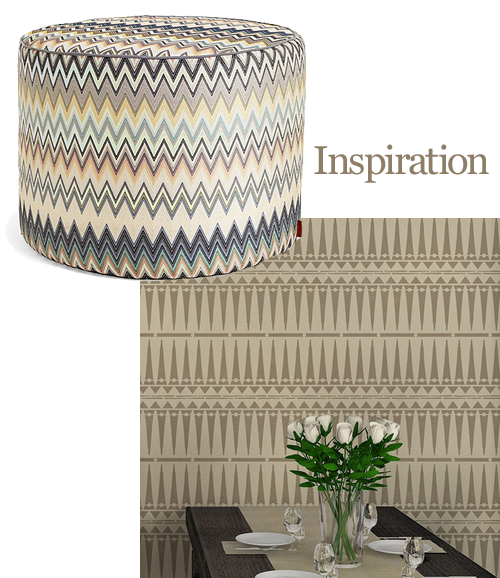 I started painting without knowing entirely where this was going, except for the colors. But as the project evolved, I thought the design was feeling a little Navajo-ish, although the stencil pattern was inspired by Africa. Because of the Navajo feel, I thought of New Mexico and stenciled a pattern on the top of the ottoman that’s similar to the Zia sun symbol on the New Mexican state flag. Here’s the before & after: 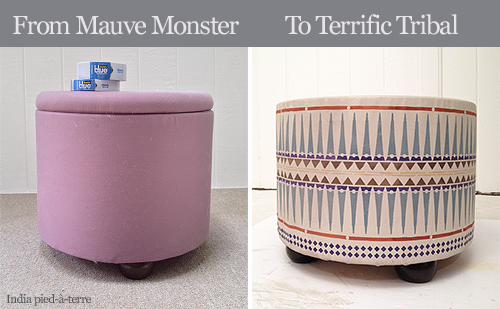 Let’s see how this happened! The photos below show how the ottoman got from plain mauve to terrific tribal. It’s a lot of steps and it’s not a gorgeous process, so here’s a thumbnail gallery:

As you can see, I kept moving the tape to mask off areas of the stencil for the different colors of paint. Some areas of color are really close, so reliable tape was important for the success of this project!

Here’s the result after the first stencil was removed: 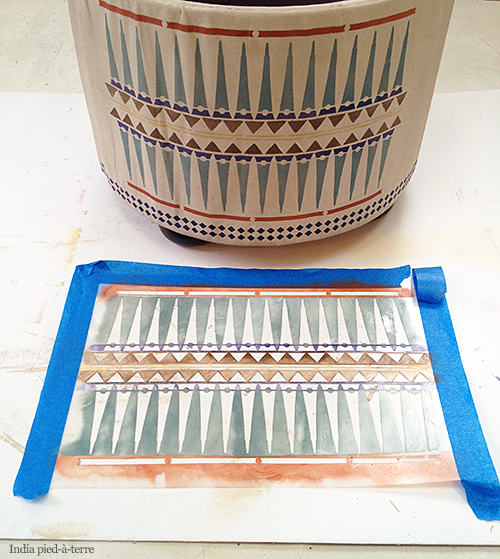 And after the entire ottoman was painted: 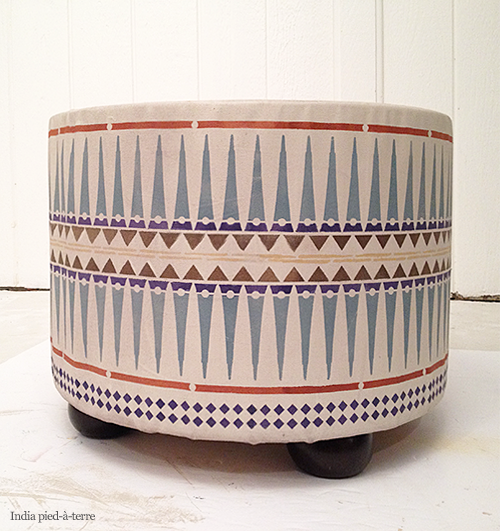 But after hours of painting, I was bothered by something. The paint color was just too saturated looking for my taste. It felt like elementary school project. But I was listening to 80s music and drinking glasses of Riesling while painting. (And no I was not doing impaired painting, because all the lines are straight and the paint is even, right?!) So I wasn’t bothered by a slight disappointment. I was in a good mood and knew there’s something you can do to easily fix this.

The fix? I simply painted a very light “dry brushed” layer of the original first layer of beige paint over everything. Yep, paint it all over all the stenciling! I made sure to rub as much paint from the brush as I could onto paper towel first, so I didn’t put too much beige paint all over the colors. This step created a distressed look and toned down the saturated colors: 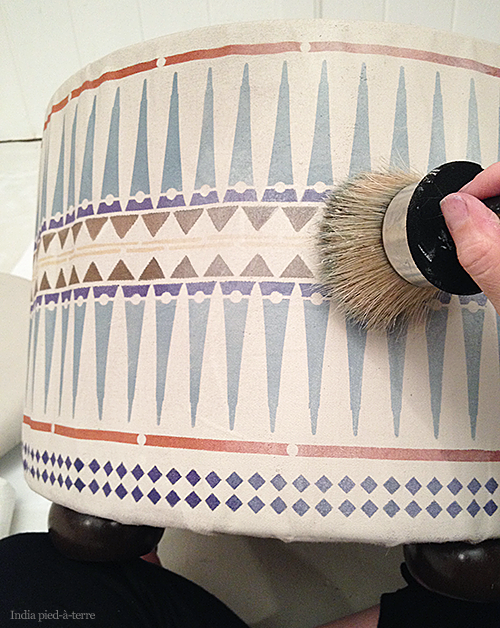 After lightening the colors with some distressing, I was happy with the result!

Also as I mentioned above, as this project unfolded, it made me think “Navajo” more than “Africa.” Maybe that’s because of the colors. I’ve traveled around New Mexico many times, and through the Navajo Nation. When you spend time in New Mexico, the state’s icon of a Zia sun with points extending out in all four directions kind of becomes burned in your brain. Because you see it everywhere. So I decided to put a Zia sun-inspired design on the ottoman’s lid: 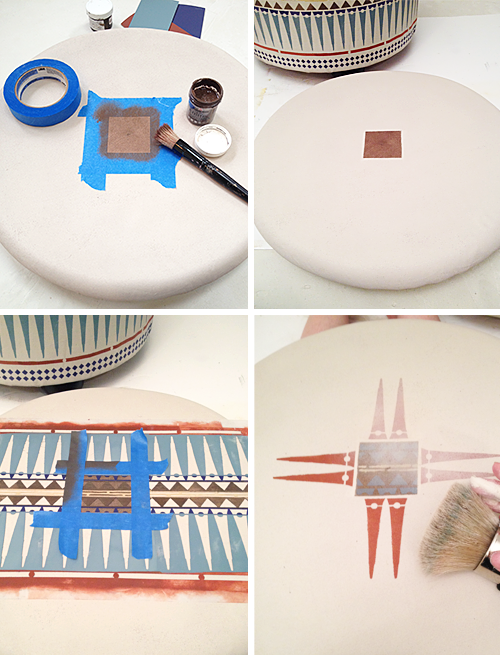 I should note, I used Behr and Benjamin Moore latex paints for this project because the contest’s cost limit was $100 and the sample pots of these paints are very economical, plus they paint well with stencils. I have an easier time controlling the thicker latex paints when stenciling than acrylic paints, but maybe acrylic paints work better for other people.  But one issue with the latex paints is they made the ottoman fabric stiff. That’s okay with me because this ottoman didn’t even have upholstery fabric on it. It was a thin fabric. Now it has a heavier canvas feel and that’s fine. But you might not want to do this project on a chair unless you mix textile additive in the paint. I do have bottles of textile additive, but they’re in plastic bins in a closet in our basement that I couldn’t get to, because concrete was drying in our basement while I did this project! Of course I had that additive for a year and the one day I need it … (!!) We’re re-tiling the basement and the tile guys are leveling the floor. Once the basement is done, this ottoman will be in the new media center (ahem, man cave) there. The ottoman’s new exciting job in life will be to hold bottles of beer and chips and salsa. And maybe a magazine or two about airplanes.

For now, here’s the ottoman all styled up in our guest room: 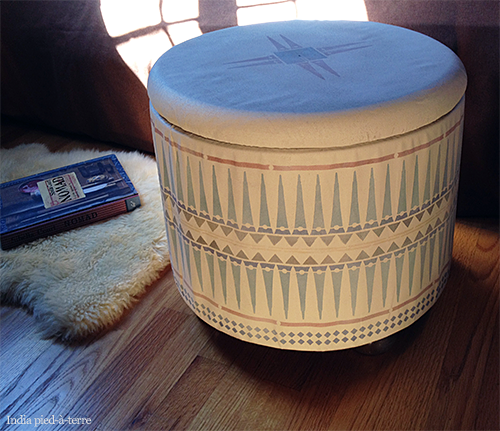