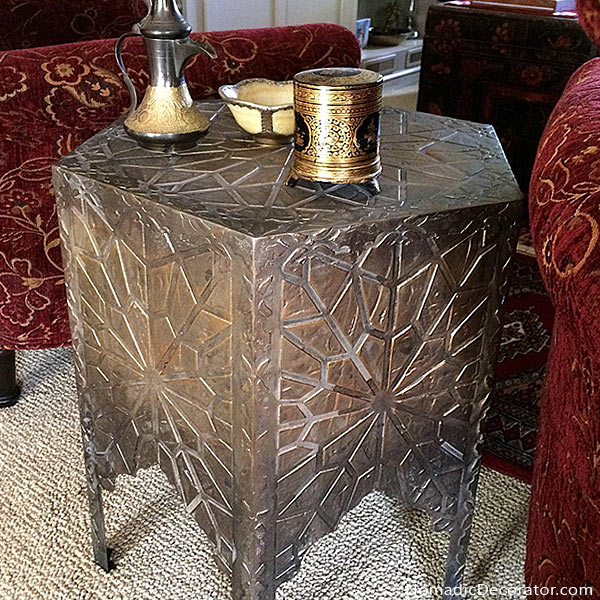 Sometimes this happens to me … with things I painted!

I painted this table with Moroccan patterns years ago and it was loved. 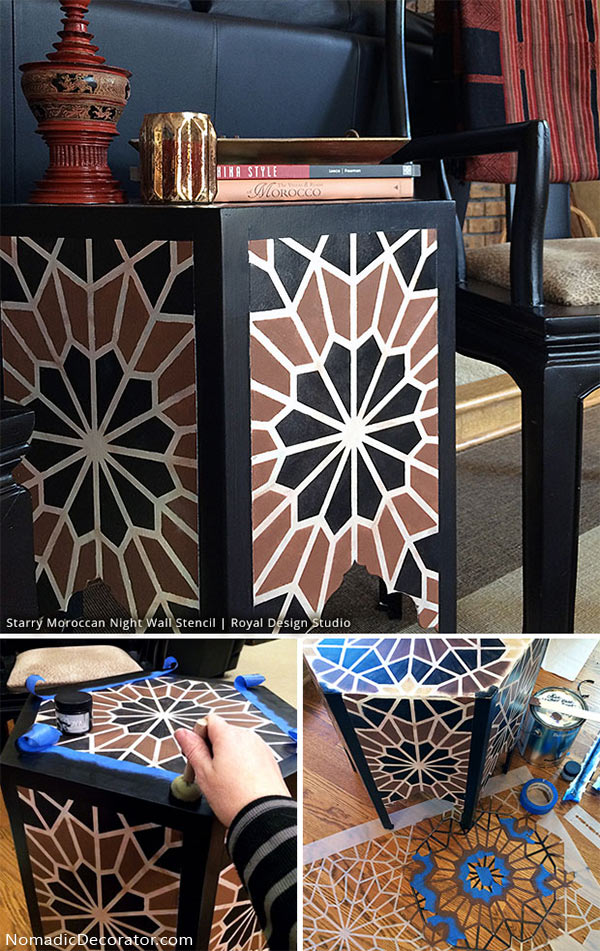 Hard to see in the photo, but the white lines were shimmery pearlescent. With pink, blue and green veins like mother of pearl inlay. If you want to learn how to paint that, visit my tutorial at Paint + Pattern.

We lived with this look for about four years. Then one summer evening, while blasting Queen music probably a little too loud for the neighbors’ liking, I did a “messy metallic” look on candlesticks. I mixed golds, bronzes, coppers, silvers, and made them look burnished and old. This was originally a white farmhouse style candlestick: 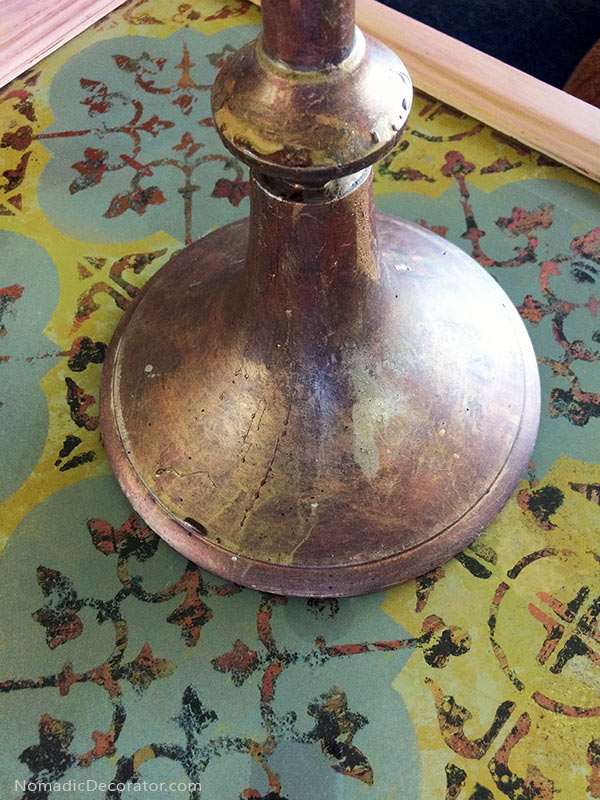 I loved this look. This might not be everyone’s favorite look, but it’s right up my design alley. I wanted to do messy metallics on MORE and BIGGER.

That’s when I got the idea.

I could see the Moroccan table with raised patterns, and messy metallic. I wanted it to look like a bronze table cast with lost wax technique in a sandpit somewhere deep in the Sahara Desert. Maybe the table was made many decades ago, and since then the table sat in a flood for awhile, so patina is darker on the bottom. Or maybe it sat too close to a road, and grease gradually built up on the bottom of it. Dust settled in the crevices between the raised patterns. Edges of the patterns got brighter as hands brushed them and books, tea cups and dishes were dragged over them.

Maybe you’d call that a wild imagination. Or a hallucination! But when painting, I’m going for an idea, a feeling, a memory of a place. I wanted this table to travel further back in time and through rough stuff in its life.

So, isn’t it funny that so many of us — me included — take pictures in front of things like this when we’re on vacation? Like chippy walls with dirt, grease, and frankly, likely mold, is worthy of photos. We call it patina. “Aged to perfection.”

But when the “dirt” or “grease” is just paint, it’s fine in the house.

STEPS TO DO THIS

After that way-too-long intro (but I’m not cutting it down), here are a few tips to get this look …

I used the same stencil as the first time the table was painted — Starry Moroccan Night from Royal Design Studio. I did not want to buy new supplies, so I used what I already owned to make raised patterns. I used a Golden molding paste on the top. That ran out. So on the sides, I used Modern Masters Venetian plaster. After the paste & plaster dried, a light sanding knocked off sharp peaks and sharp lines. I left many imperfections, pocks and pits because I want the table to look old and a bit battered. I want some color to settle into the pits.

I added a “sort of floral” pattern along the edges. That pattern I believe was from stock photography like iStockphoto or ShutterStock, and I cut it with a Cricut Explore.

Gather a bunch of metallics. Lots! I used mostly acrylics: coppers, bronzes, silver, golds from bright gold to old gold, even a shimmery metallic black. And yeah, I used several coppers, several bronzes. This builds up a depth of color and variety.

I couldn’t even tell you what metallic I did first, second, third, fourth etc. because I didn’t document and photograph every step. I needed to get into a creative flow with this. Stopping to document really interrupts that. In general, I used gold and silver in the middle, and darker metallics like the bronzes and black on the edges. I used more bronze and black along the bottoms and feathered it out about 1/3 to halfway up.

Spray Watered Down Paint & Spread It

I wanted “dust” in the crevices between the raised patterns. This was a two-step process. For “dust” to show up, it’s better if it’s on a darker background. So first you paint a dark background, then you do the dust over it.

First, fill a spray bottle with water and black paint. The ratio should be 20% paint, 80% water. Maybe even 10% paint, 90% water. Lots of water so the paint is runny. This is MESSY. Protect the surface under your project. I had  a dropcloth on the floor but some black paint splashed on white walls nearby! 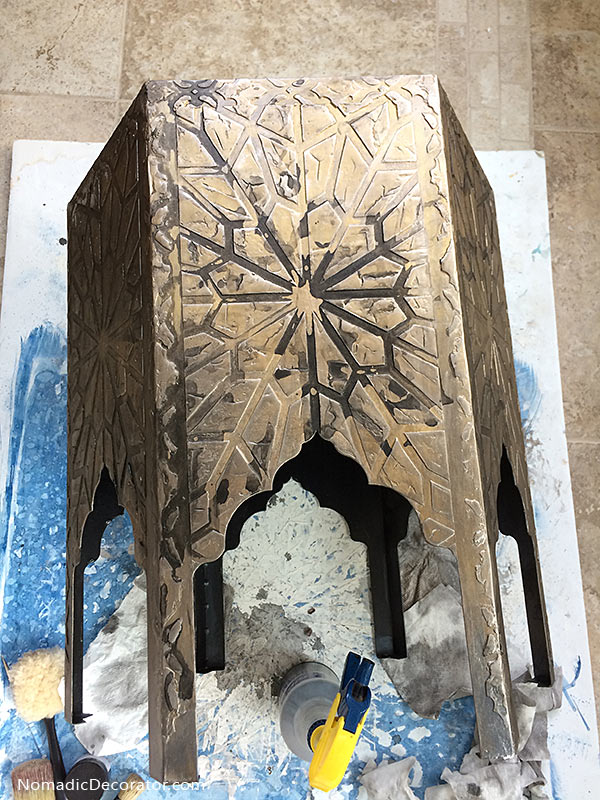 Here’s a video showing how to smoooooosh watery paint between the raised stencils:

Extra water WILL run off your project. You might get drips. Some people like drips, some don’t. Have paper towel on hand to dab watery paint where you don’t want it. Let the surface dry.

Now. You might notice my table has six sides. When you do this watery paint spray, you have to spray it on a horizontal surface. So … I had seven surfaces, and all had to dry before I could roll the table over and do the next side! It took forever.

But wait, there’s more. Next we add the “dust” over the dark areas in the crevices.

Dust is not shiny, so I used matte chalk and clay paints, like a neutral DIY Paint or Dixie Belle paint. I washed the black paint out of the spray bottle, then made another watery paint with about 10-20% clay/chalk paint with 80-90% water. 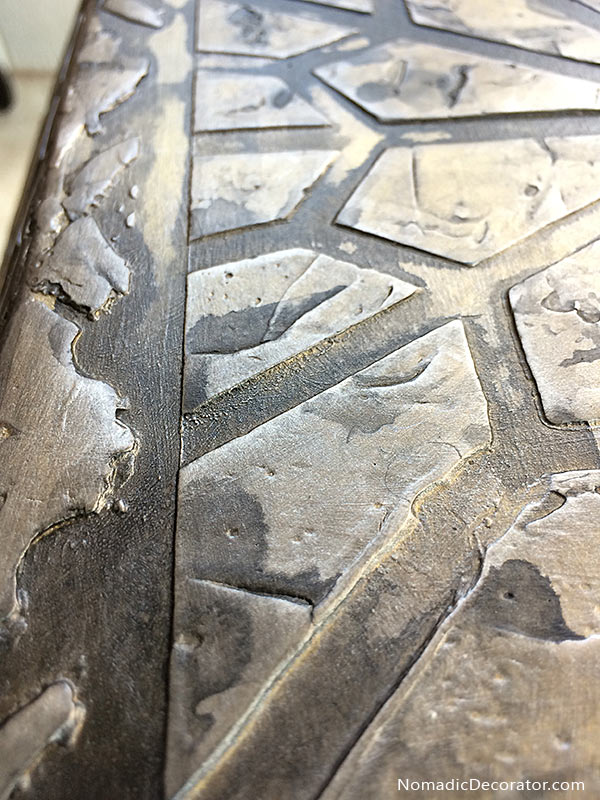 And yeah, I had to do this with all seven surfaces, letting them all dry before flipping the table over.

When the paint dries, you should see what looks like “dust” in the cracks between the patterns.

If the raised patterns have pits and holes in them, the black paint and the chalky paint will settle into those pits and make cool old-looking patina. 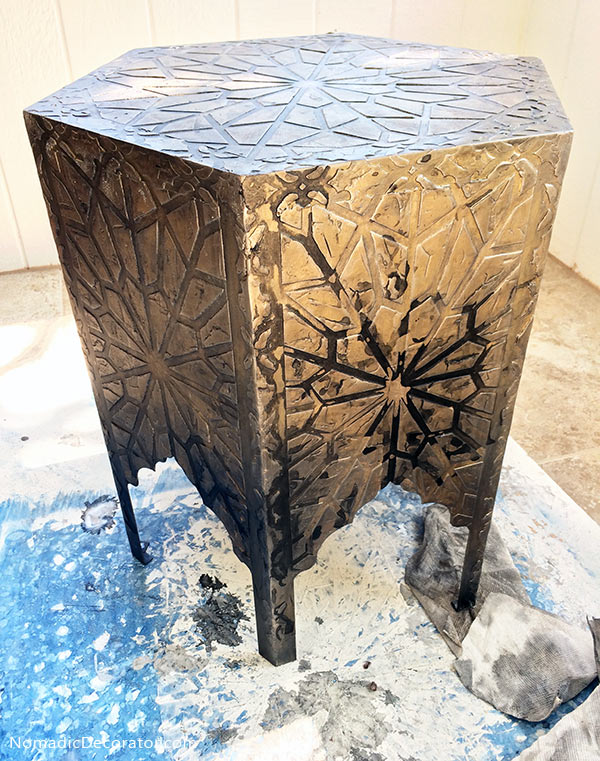 This admittedly looks terrible. When working with lots of paint layers, it looks worse before it gets better!

There was some re-doing and re-painting with dry brushing.

Sometimes the table got too light — I dry brushed too much silver.

Sometimes it got too red — I dry brushed too much copper.

Sometimes the gold got too muddy — I dry brushed too much black on the gold.

None of this is a problem. It’s part of the process and everything can be painted over. The nice thing about dry brushing is you can do many layers, and the paint doesn’t get too thick because you’re applying barely-there feathers of paint. When color was going in the wrong direction, I corrected it by dry brushing another color. I was aiming for a color in my head, and I knew if it was on track or if it was off. 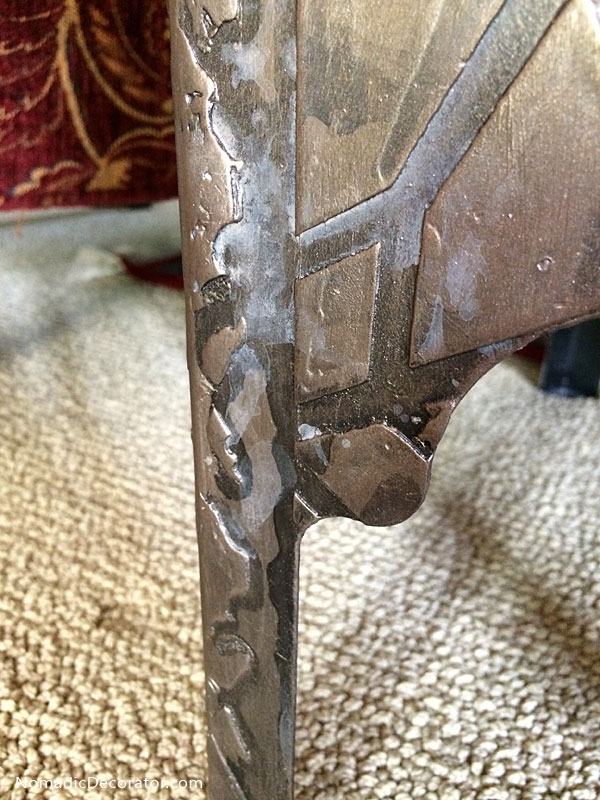 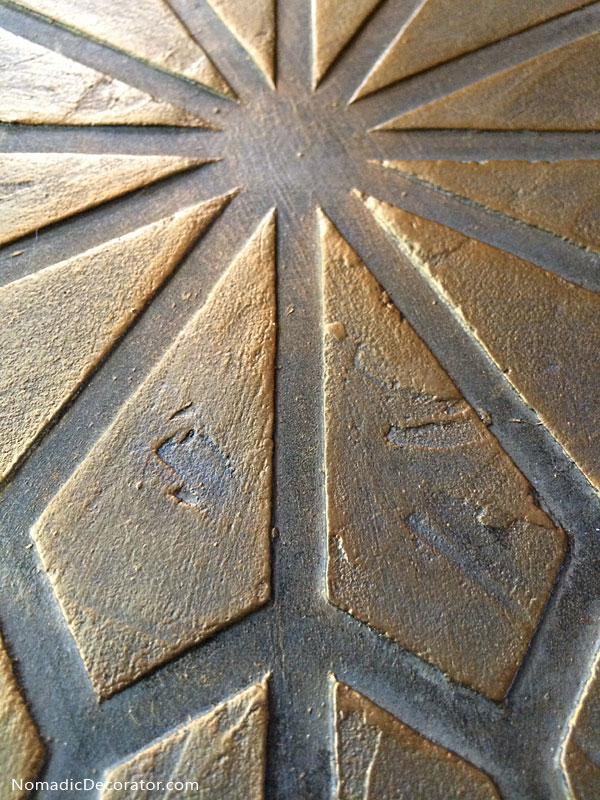 I’ll be honest, I was getting really tired of this table at the end.

Even when it was done, it sat in the sunroom for a few days before I brought it in to photograph it. I was THAT tired of painting it!

The work was worth it though. It is exactly the Moroccan table picture that popped in my mind. It looks good between red chairs. 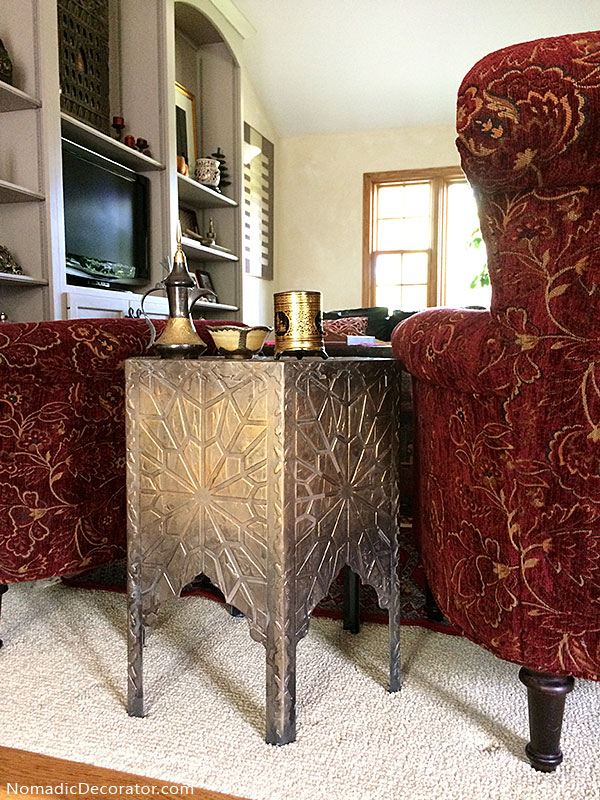 I have not sealed it with any wax or topcoat. I worry about changing the sheen of the metallics and/or the “dust.” I worked so hard to get it the way I wanted it, I would kick myself if i put a topcoat on it and the color or sheen changed! Most of the paint is acrylic and the table is not heavily used, so I’m not worried about wear ‘n tear.

So if you’ve been looking at something that you wish was different — even if it’s something you painted — it’s only paint. You can always re-paint. Try it, have fun, play with giving it a different look! 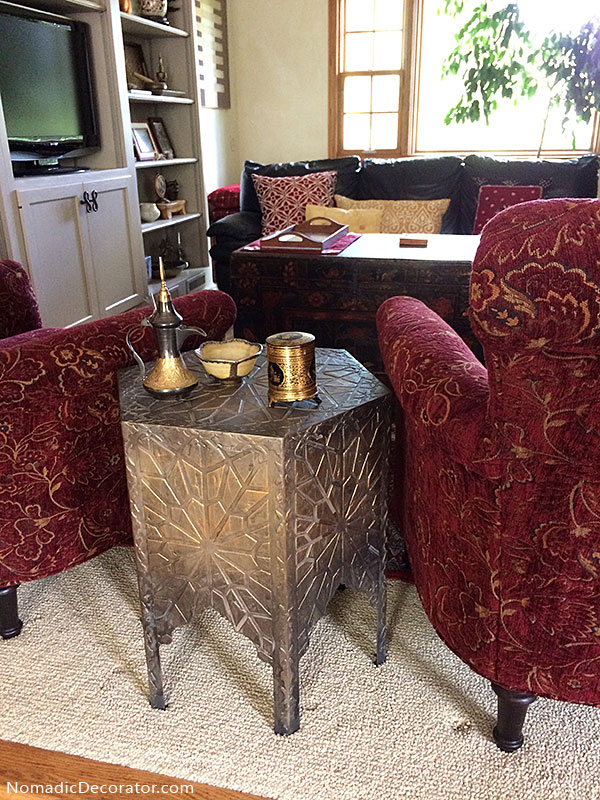