We’ll be heading to the India pied-à-terre soon — our apartment in Chennai, India — so I’m planning projects for the place and looking at photos from past trips for inspiration. I spotted this “funny face” and love its soft color palette: 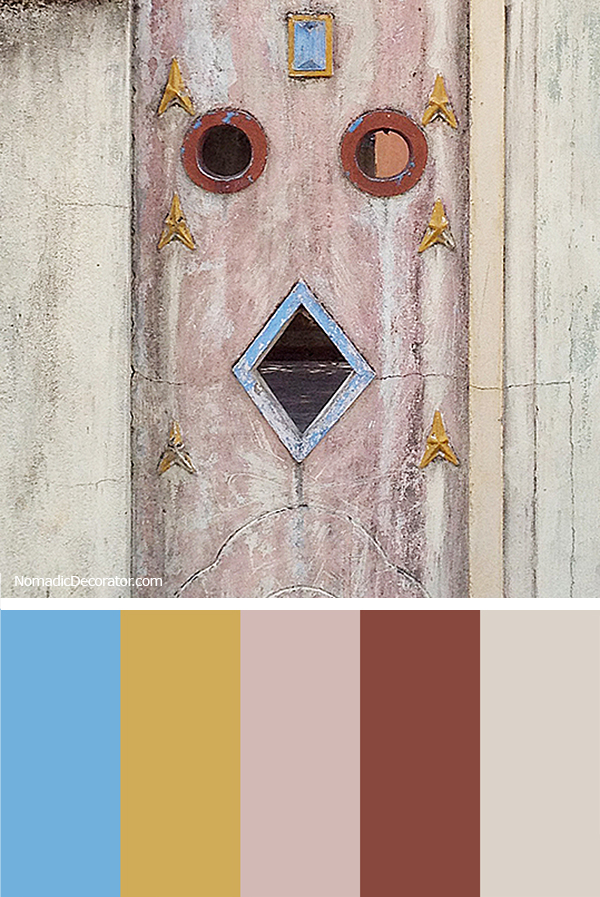 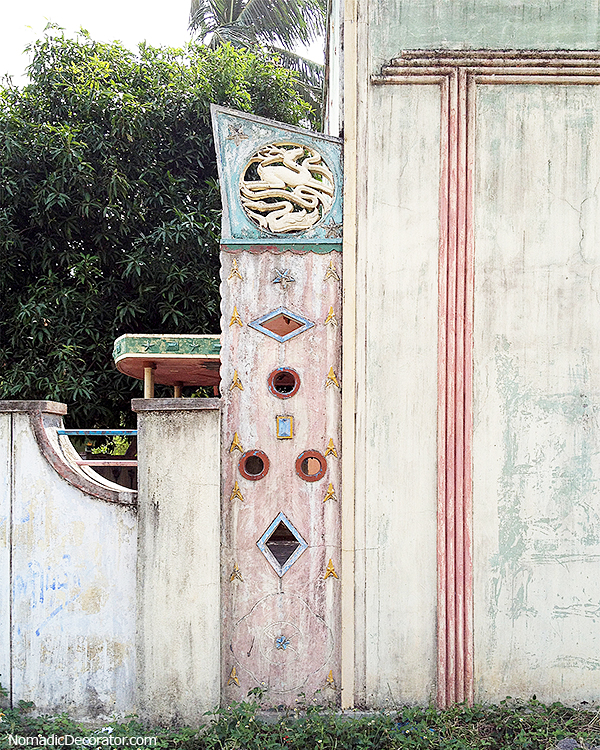 I spotted this wall while our driver sped past it, on the way to see a temple in a tiny village called Osur southwest of Chennai, India.

Maybe this soft quiet wall stood out because it was a rarity among all the screaming bright colors. The drive was about 2 hours long (or more? I forget now) so I saw an unusual billboard nearby and made a mental note to watch for the billboard during the drive back. Because I needed a photo of this wall! We told the driver to STOPPPPP, stop-stop-stop — because saying stop one time doesn’t work so well — and I jumped out and greedily got this cute wall into my iPhone. 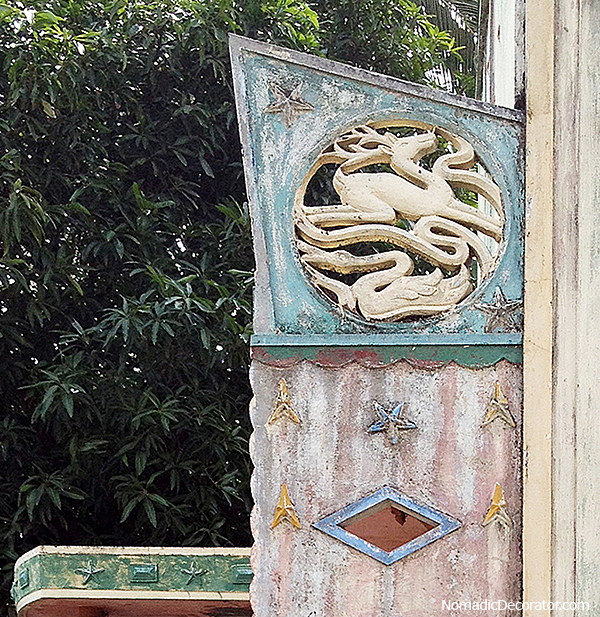 I share a few pictures of it here as inspiration for color combos, for old wall texture, for adding whimsy and fun in unexpected places!

I am not sure if the pink pipes are for plumbing or perhaps they hold electrical wires. But if they are functional, someone took the care to ensure they were worked into the design, not just slapped on the wall wherever. And I appreciate that, and details like that certainly caught my eye as we flew by.


Many of India’s most famous views are framed by the Mughal arch: 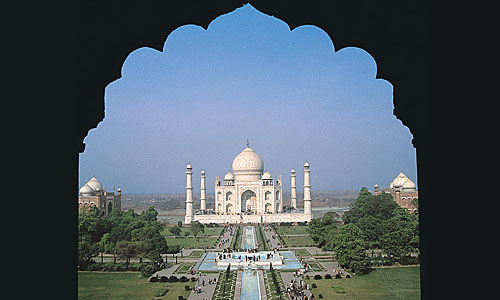 This shape of arch was used in the great architectural monuments that were built by Mughal emperors centuries ago. India isn’t the only place where you’ll see this arch though – the Mughal emperors were influenced by Persian designs and Islamic architecture of those times. But I think nowadays, when you see this arch shape, it’s often an iconic Indian motif.

Here it is in the Red Fort in Old Delhi, as photographed by Fred Inklaar on Flickr: 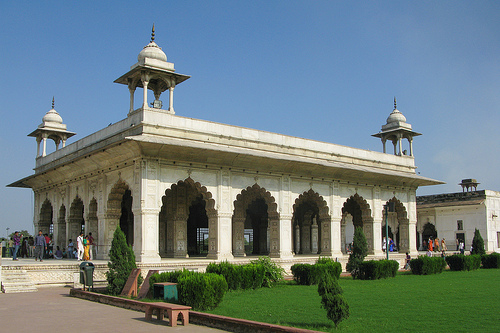 Aren’t they so elegant, in this photo taken by Briony and Terry in India: 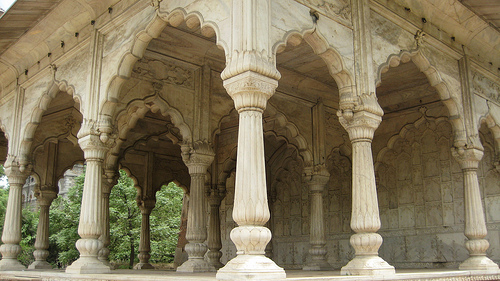 Here they’re cut into sandstone, and they captivated the photographer, Andrea Kirby, as their shapes have captivated so many others to capture them on film: 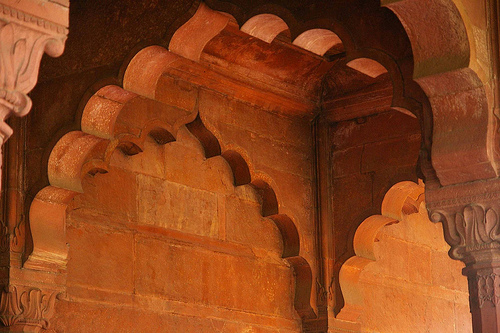 I love this view and definitely will see it myself in person some day – a tunnel of the Mughal arches at the Red Fort, as captured by TPM on Flickr: 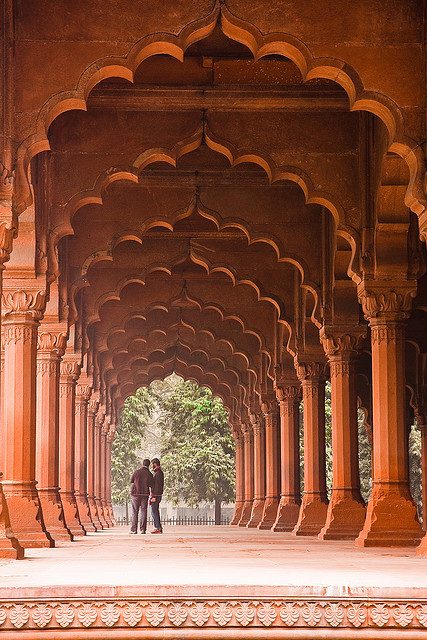 The Mughal arches have taken ahold of me too, but much smaller versions in wooden printing blocks from Jaipur:

When I travel for work, I like to take supplies for DIYs during down-time. These printing blocks traveled with me to a hotel recently, where I was faced with a bed of crisp white linens! 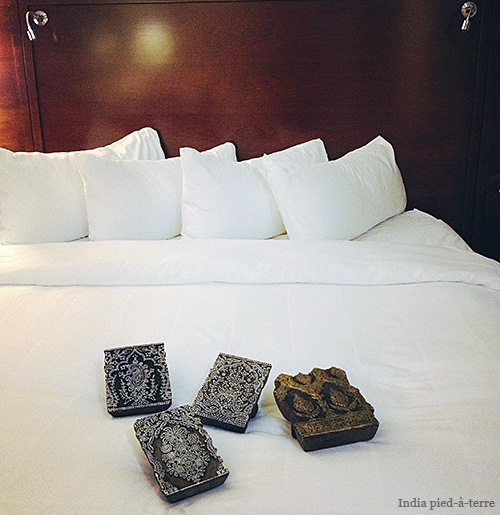 After looking at that blank, tempting canvas for five days, I managed to check out without redecorating the hotel room. Instead, something else was printed on and photographed, and now I’m playing around with some ideas to be revealed soon. So this is not the last you’ll see of these Mughal arches …