Before this blog was called the Nomadic Decorator, it was called “India pied-à-terre” for four years. It was originally about the construction and decorating of our “second home” apartment in Chennai, India. But because we live near Chicago with busy lives, it took awhile to finish the apartment. The construction is done, and now we’re decorating, as much as we can in 2-4 weeks a year spent there!

The India pied-à-terre story began when my husband’s family decided to replace their single-family house in Chennai’s T. Nagar neighborhood with a building of flats. Here’s a rooftop view from the former house: 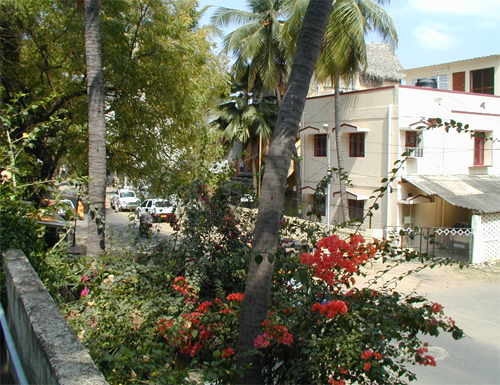 Much change has happened there. Once-stately homes with wraparound porches, sheltered from the sun by coconut, banana trees, bougainvillea and jasmine clambering up posts (just like in the photo above), are no more. Lots are now filled to the brim with multi-story concrete structures. We’d shake our heads at what was lost.

It wasn’t easy for them to make the final decision. The big rose garden would be gone. Another piece of old Chennai would be erased. Life would be disrupted. But much would be gained: A carport, bigger rooms, new kitchens and bathrooms, homes for extended family to be close. There would be two big terraces for gardens, more garden space than ever before.

Groundbreaking was in April 2009 and by summer 2010, families were settled in their new homes.

We have an apartment on the top floor. So now we are completing our getaway place in India, our second home or pied-à-terre, for vacation or when visiting South India for business.

Here’s a sample of our floor plan:

Here’s a moodboard for the foyer area. That door you see here is the real, rustic 100+ year old door that you step through into the apartment: 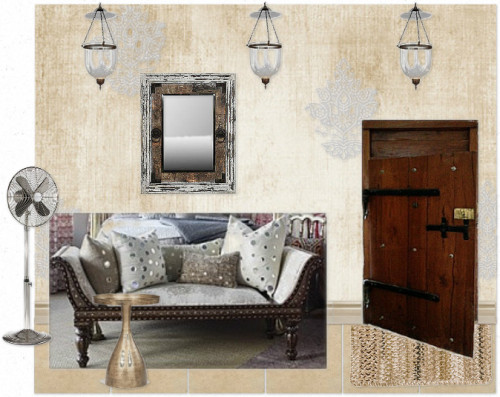 Here was my first peek into the India pied-à-terre, in November 2011:

The door is about a hundred years old and it’s so heavy, it took seven men to carry it up the stairs. It has a story too, you can see it here.

19 Replies to “About the India pied-à-terre”