The Nandi Hills are about 60 km north of Bangalore in southern India, an easy rural day-trip escape from the loud city. The air is cool and fresh on your face. The view from the high hills reveals a countryside of farms and villages, and it’s very serene.

I came for temples. The stone carvings, specifically.

And I found them, at a temple complex in a village at the base of Nandi Hill. Here’s a carving that greets you as you pass through the stone entrance into the temple: 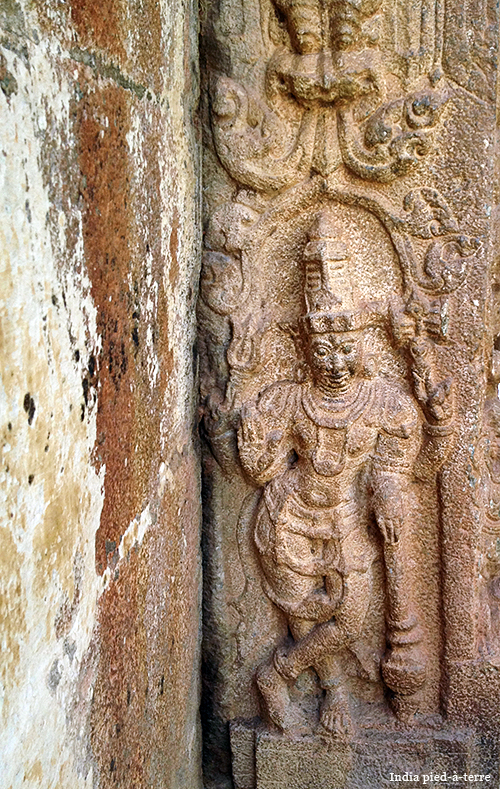 These images are from the Bhoga Nandeeshwara and Arunachaleshwara temples. The temples are together in what looks to the eye like one big sprawling temple. It was first built in the 9th century, and ruling dynasties added to the complex over the centuries. In fact five rulers added to the architecture – the Banas, the Pallavas, the Cholas, the Hoysalas, and Vijayanagar rulers. These dynasties had differing styles to their architecture and art, but somehow they kept the look in these temples pretty much harmonious.

There are many hundreds of carved columns in the complex – in addition to carved walls – and I saw only a small portion of them. I felt like my eyes wanted to drink in every nook and cranny! Here are some images … 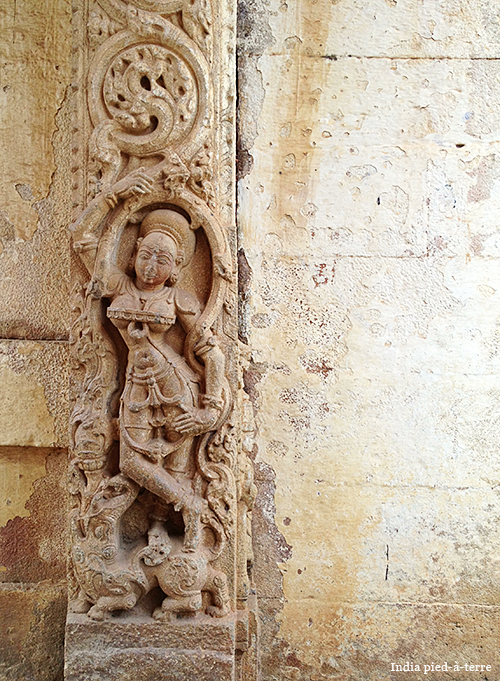 The following patterns are above the figure in the image above. You can tell they were once more detailed and opulent. I like the graceful swirls. 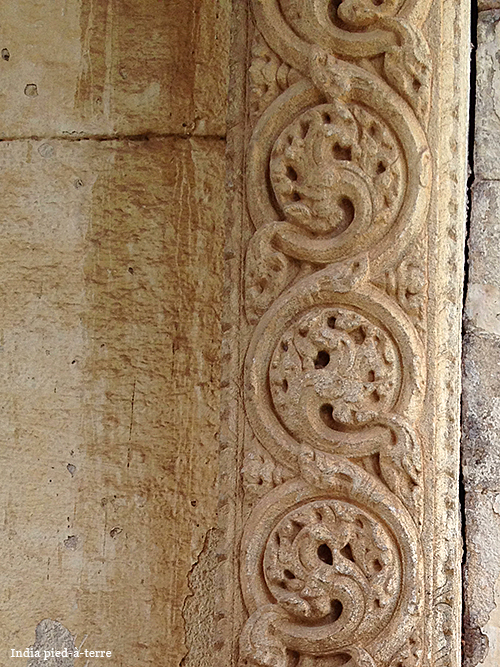 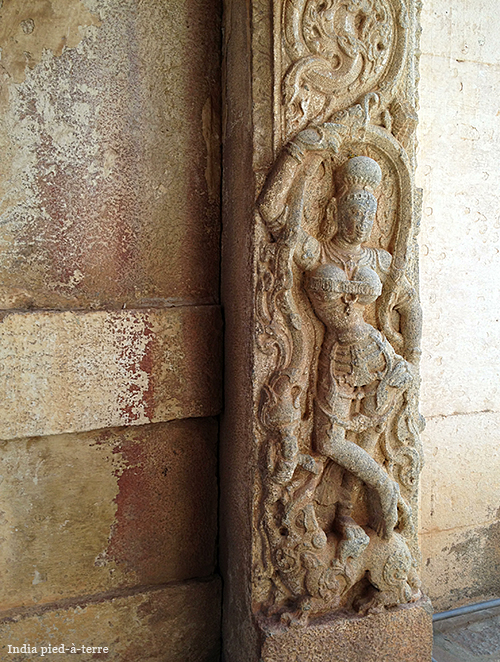 It’s one of the oldest temples in the state of Karnataka in India. It’s still in active use. While we were there, there was a large prayer ritual ceremony, a puja. 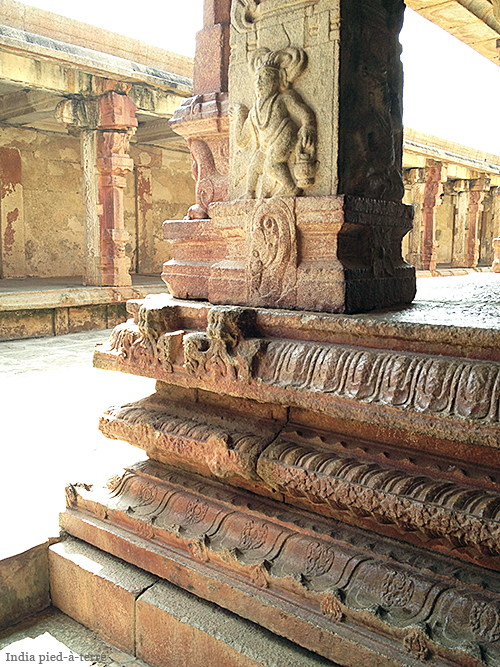 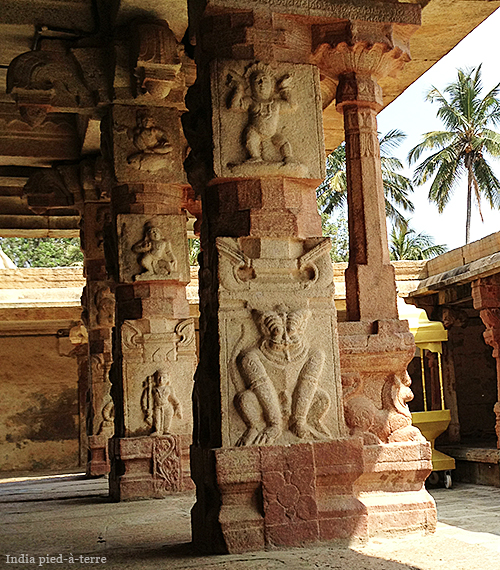 See the flowers in the picture below? The openings in the wall there are windows to allow light and air inside the inner part of the temple. 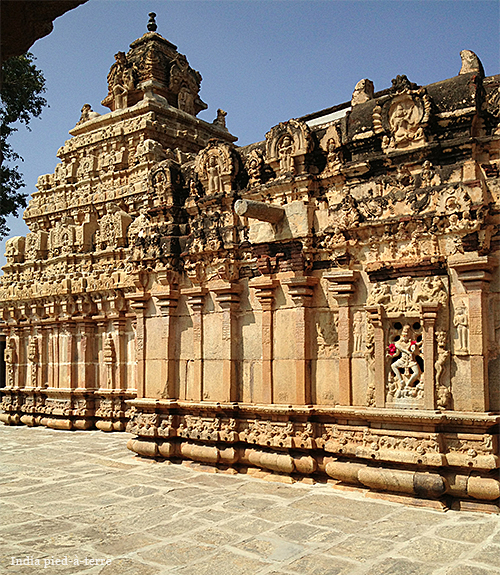 I pointed the iPhone camera lens through a hole in a similar window, and look what was found inside:

There were many carvings we could see while peeking through the windows. But there was a big ceremonial ritual happening in the inner sanctum at the time, and I did not want to interrupt it, no matter how badly I wanted to see what was in there.

So we circled the outside, trying to stay in the shaded areas because the hot sun on the stone floors was burning our bare feet (you have to leave your shoes outside the temple). 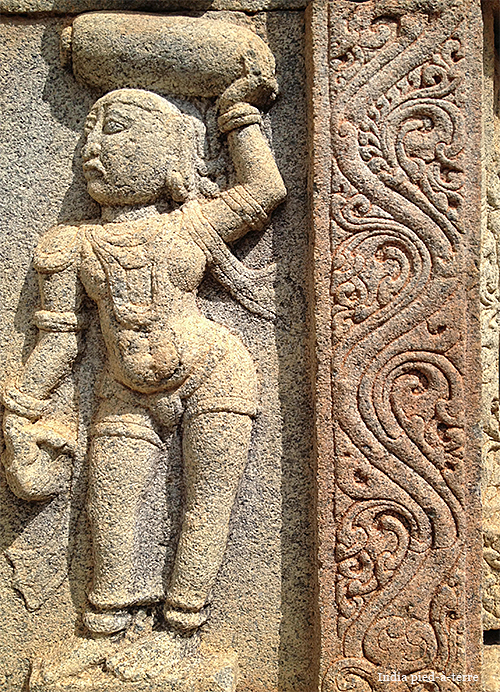 I believe the images below show another temple within this complex, a temple that was added by one of the other five dynasties that ruled this region. The style is different than the carvings above. 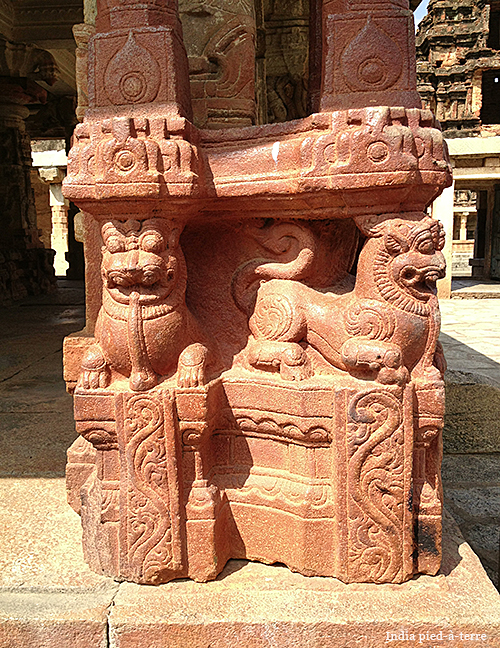 After this long walk in the mid-day sun, my exposed skin was about as red as this stone! 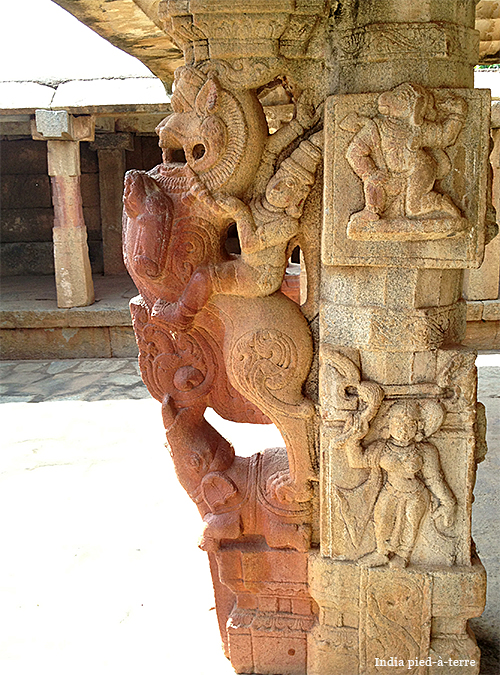 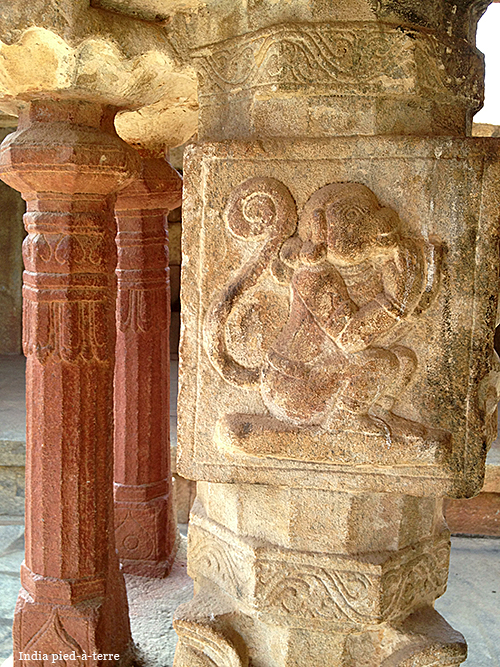 This was an interesting motif: 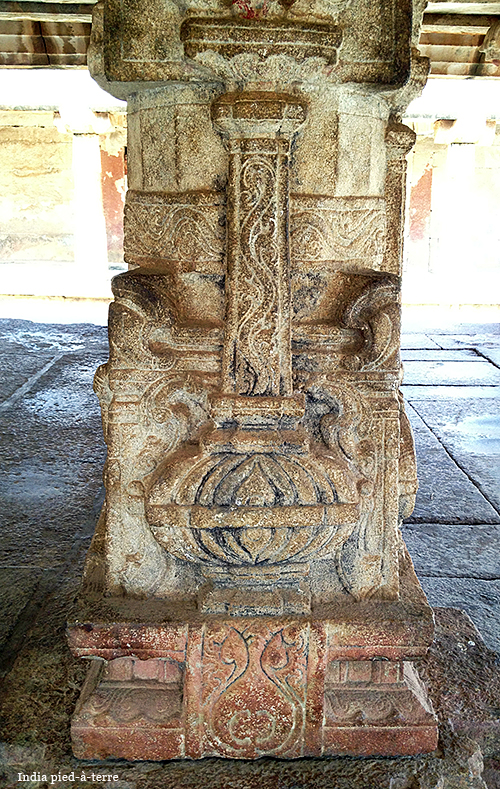 I tend to take photos closer up because I want to see detail, but this gives you an idea of what this area looked like. 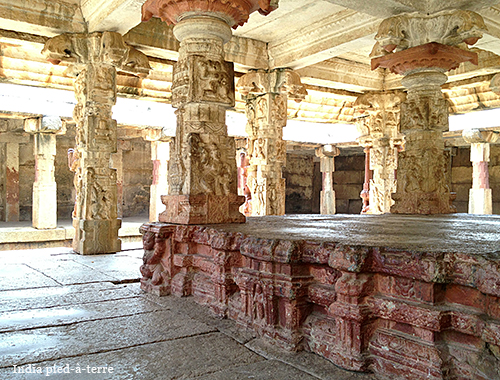 Not every surface is so heavily ornamented. Your eyes also get a rest with views like this: 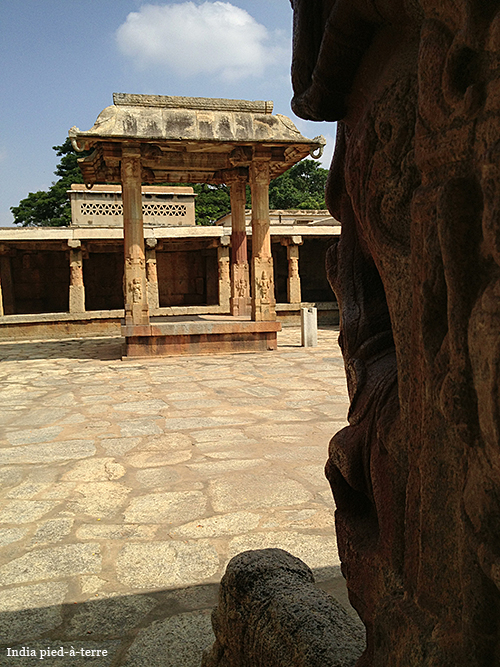 Before diving into this area: 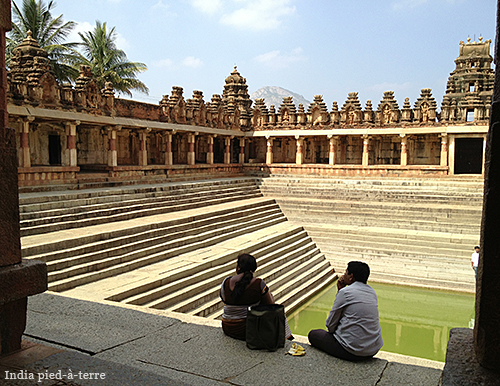 Temples have these wells or pools for water supply, rituals and bathing. People in this area seemed to relax and not want to leave. It had that effect on me too. Something about the symmetry here is mesmerizing. This couple was enjoying a snack of bananas. When they left, I was able to snap this image from the center: 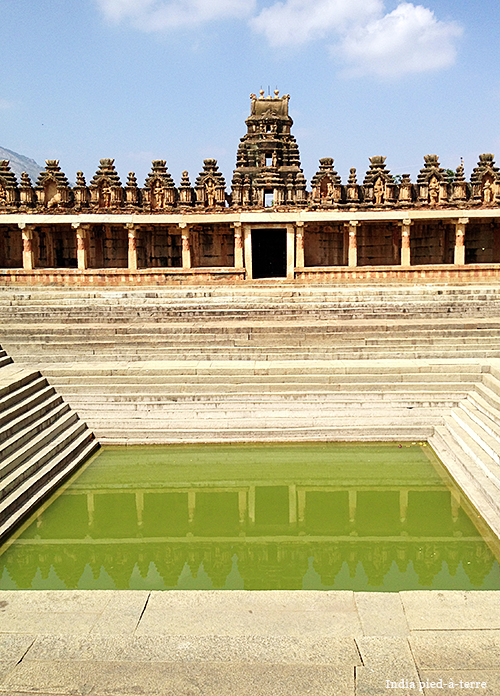 Feeling rejuvenated after this trip, we set off again back toward the city of Bangalore.

In a moment of perhaps divine intervention, as we were walking out of the temple, my husband’s phone rang. Who even has this phone number? He got the phone only the day before, as a temporary pre-paid phone to work within India. But somehow, a childhood friend of his got the number. Turns out, that friend lives right on the way back into the city, along the same road we were traveling. They haven’t seen each other in a decade! The friend’s wife was preparing lunch at that moment and invited us to stop by on our way back to the city. What timing! And because it was now about 2 p.m. and we hadn’t eaten since the breakfast at the hotel at 8 a.m., we were really hungry. So the afternoon was a lovely meal with two old friends – truly, since they were wee little boys – catching up.