In the previous post about this project, you followed along with me on a super strange trail of creative inspiration. It involved the Taj Mahal, a wayward Indian taxi driver, poets from thousands of years ago, and love sentiments followed by quick death. In the end, I was able to piece together an idea acceptable for a 50th wedding anniversary gift. That took some work because obviously a love sentiment followed by quick death is not an acceptable gift!

The idea was to make wall art by building layers of patterned scrapbook paper and painted stencil patterns. I added a South Indian temple arch shape and a love poem in ancient Indian Tamil script. Today I’ll show the play-by-play of how to make a scrapbook paper collage like this.

Money-saving tip: Look for “remnant frames” in the framing departments of craft stores!

One rule for this project was to use materials I already have. There was a “remnant frame” in our basement. Remnant or reject frames can be found super cheap in the framing area of JoAnn, Michaels or Hobby Lobby. You can get a pricey Larson-Juhl frame for a fraction of the original price. I’ve paid $10 or $20 for frames that were originally $150-200. This was a decent size 14″ x 22″ Larson-Juhl frame.

I also had thick chipboard in the basement (it’s like a whole craft store down there, I’m tellin’ ya) and I cut two 14″ x 22″ pieces of chipboard with a box cutter. These pieces were glued together to make a thick base for the art. While doing a previous project, I found chipboard curled at the corners when I glued paper to it. So I’m hoping a thicker board will not curl. My board, with two pieces glued together, is about 1/4″ thick now. 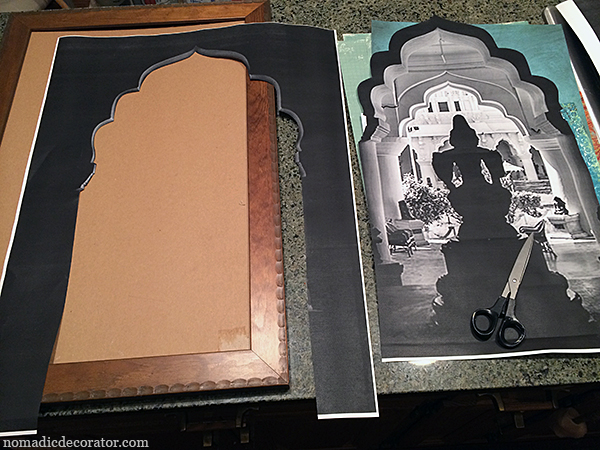 In the previous post about inspiration, you learn why there’s an arch in the collage. I am not very good at drawing things. So in Photoshop, I enlarged a photo of an arch from an ancient South Indian temple. I printed it as a large “engineer print” at Staples for about $6. The photo was not fantastic quality but that’s okay. I didn’t use the actual photo in the artwork. I just used it as a guide to draw an outline of the arch shape.

Money-saving tip: Scrapbook papers cost under $1 each and are a very inexpensive way to get lots of pattern and color.

Next I sifted through a foot-tall stack of scrapbook papers. My parents like cool colors. So I built two color palettes based on blue — one was more navy blue and the other was teal and green. Chaai the Crafty Cat gets involved in all my projects and so he looked at the paper choices. He does not look thrilled. He doesn’t say why. Maybe he likes purple paper. Maybe he wanted FOOD. As a 20-pound cat, he always wants food. 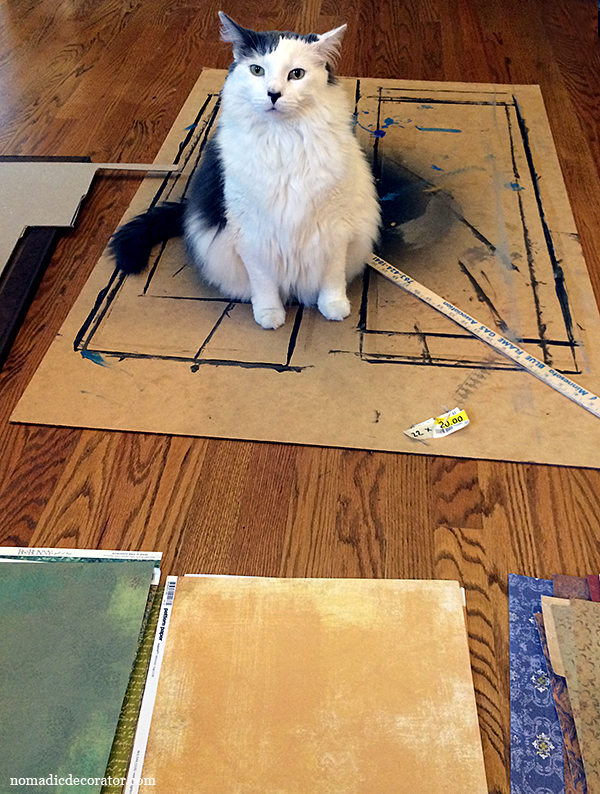 I decided the navy blue was murky and muddy, and for a 50th anniversary celebration, brighter colors like teal would be better. I think Chaai is happy with this choice too.

When choosing patterned papers for a collage project, here’s a formula I usually use: 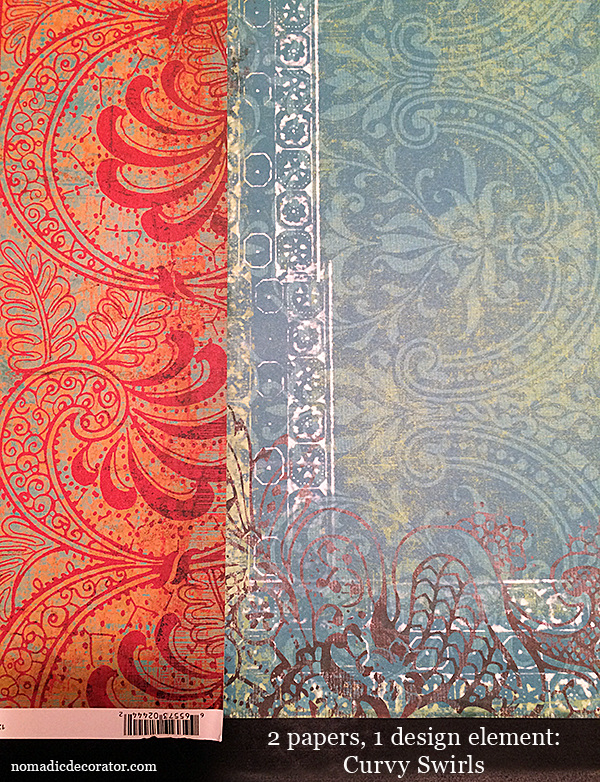 I lay out the papers before cutting anything to see how they all relate to each other. Are they fighting? Are they singing harmoniously? I’m not sure how to share exact guidelines for this. It’s more of a “feel.” I mostly try to pay attention to where my eyes look. Do they keep bouncing around, unable to focus on anything? Or are your eyes able to find a starting focal point and then naturally sweep across all the papers? If your eyes are not drawn to a focal point, re-arrange your papers and design elements to create a focal point. 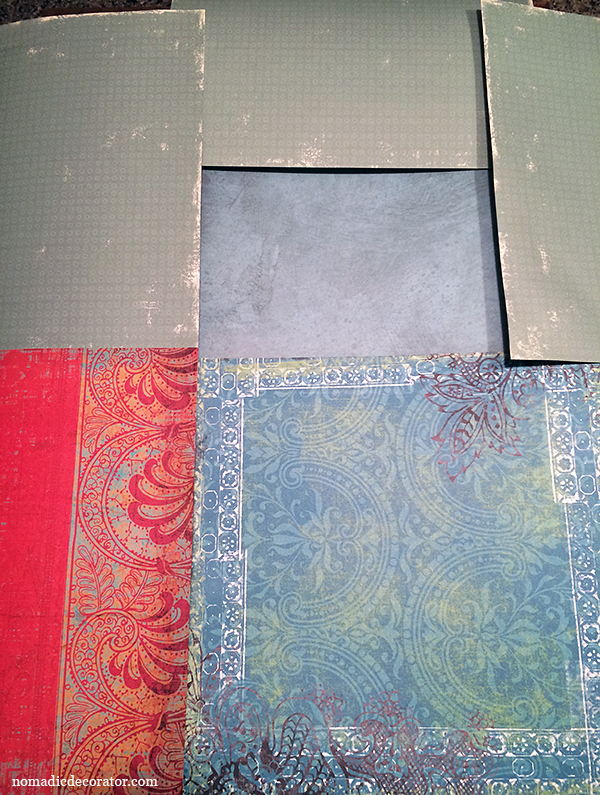 Because I chose teal blue as the primary color for this collage, I start with this color. I choose a blue paper for the lower right corner, which will be a prominent part of the collage because it will eventually fill in the arch. 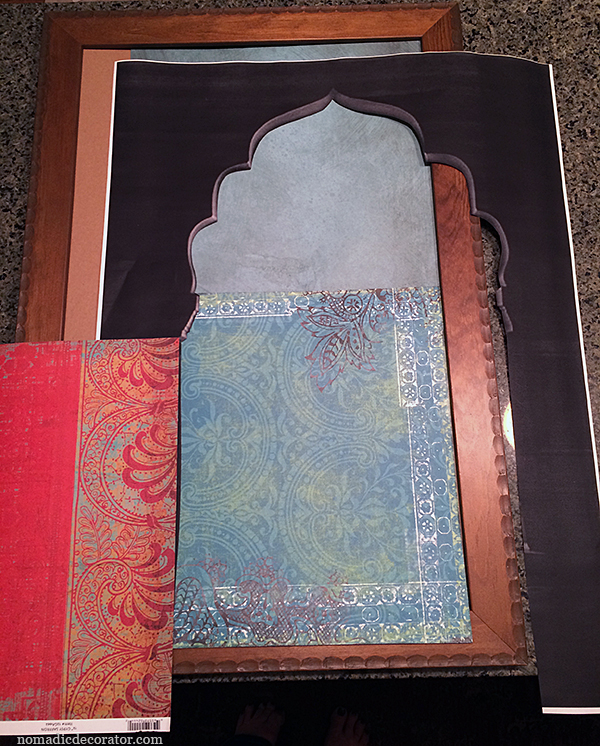 Next, I used the big engineering print of the arch as a guide to cut an arch out of green papers. The arch was secured with double-sided scrapbook tape and rubber cement. I like rubber cement or E6000 glue for projects like this because if they smear you can easily clean up both glues and leave no trace of smears.

After securing the blue paper to the chipboard with double-sided scrapbook tape, I started “building” around that paper with layers of papers. For contrast, I added the red “column” paper on the left side. Then I added another blue paper so the arch would be completely “filled” with blue.

On this second blue paper, for some more pattern, I stenciled an Annapakshi bird stencil from Royal Design Studio with teal blue stencil creme paint. The Annapakshi is a mythical auspicious bird in India, so it fits the Indian theme of this collage. The stencil was placed to align perfectly in the middle of the arch. 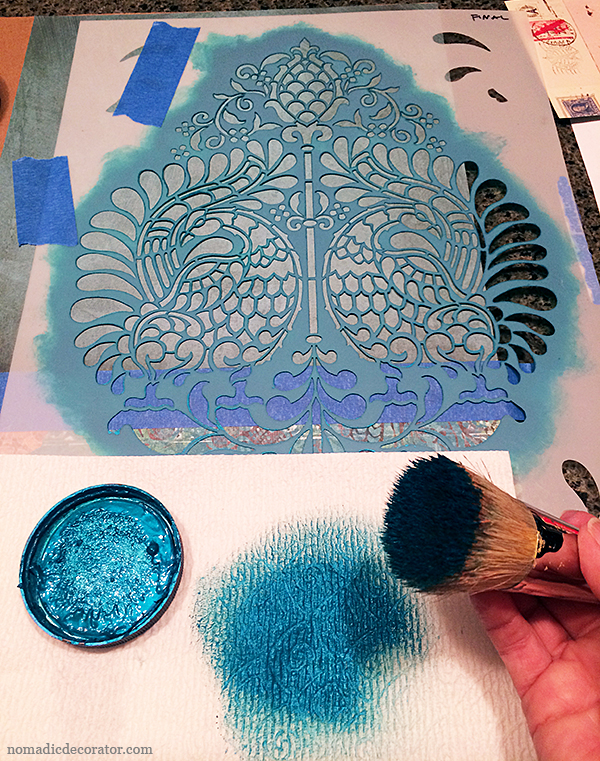 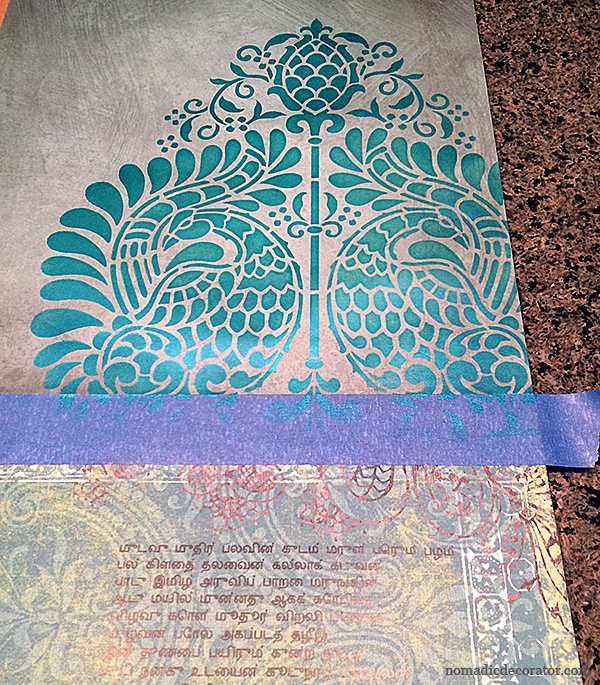 At this point, I finished everything that I had mentally mapped out in advance. Now it was time to play “on the fly.” I felt like the teal painted Annapakshi birds needed some balance, so I stenciled a floral Indian border design on the bottom with the same teal paint.

I originally painted this same border across the top in red, but then the red band of paint at the top competed too much with the red stripe on the lower left side. It made two focal points and drew attention away from the arch. Not a problem — you can always fix things you don’t like! To fix this, I taped some green paper over the red paint. Now I knew to not put too strong a color at the top, so I decided to do a more subtle painted pattern here.

I decided to play up the curved arch shape, and painted a partial medallion centered above the arch. This was painted in gold because gold is the official gift for a 50th anniversary. It also has shapes that remind me of a bindi which is the mark on a forehead worn by married women in India. 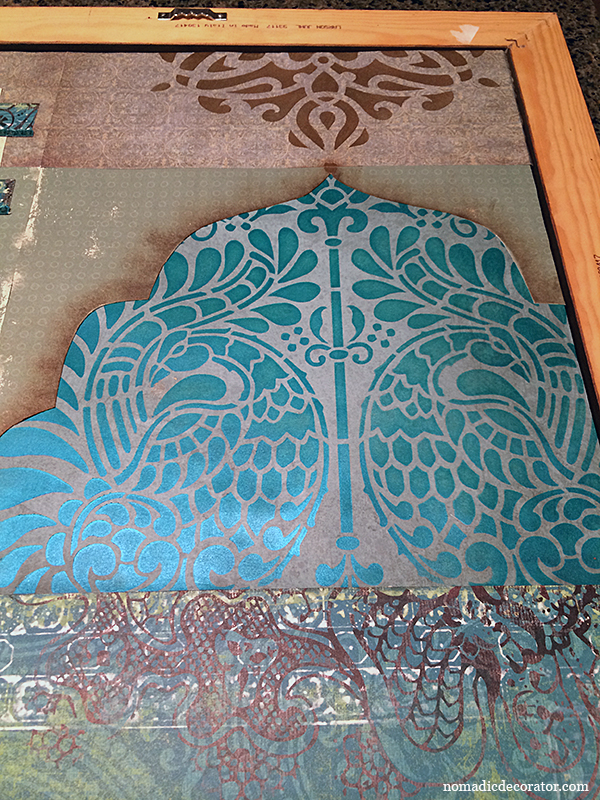 The upper left area felt a little bare. What to do? If this were a building, this would be a flat bare area next to the arch. I thought about how on buildings in India you might see bits and pieces of colorful flyers and posters. Along with usually a “no bills” warning which is ignored! So I cut little pieces of papers and taped them there. 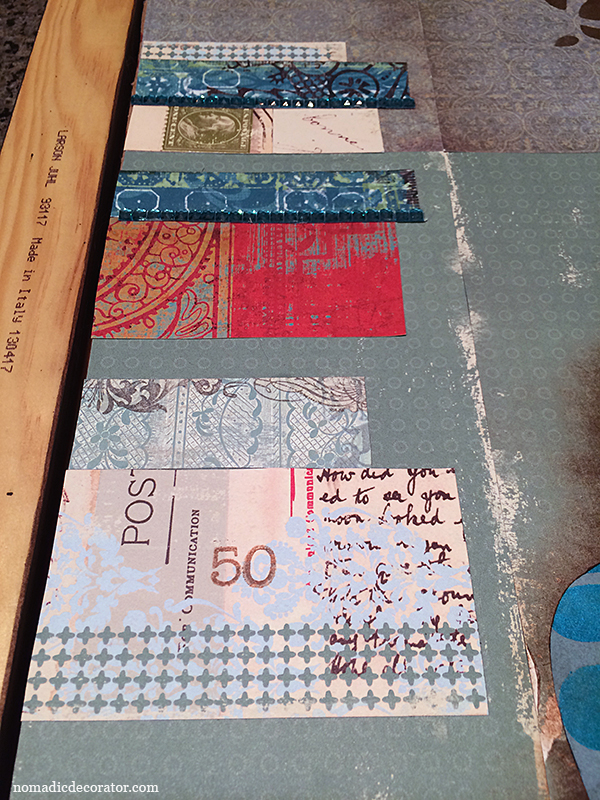 Sometimes you wind up going in a creative direction as a cover-up. There was an unsightly seam in some blue paper because I had to cut it to pass it through a printer. To cover up this seam, I found teal blue rhinestones in scrapbook supplies. The rhinestones fit the theme — India is full of sparkly bejeweled things! For balance, I added a few shorter lines of rhinestones on the upper left. 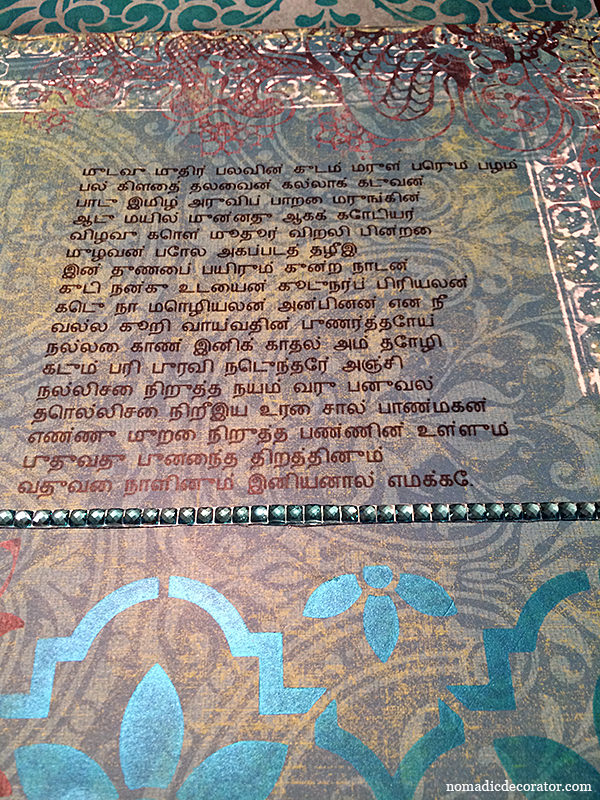 It’s important to know when to stop. It felt like this was a good stopping point, before there’s “too much.” Except the arch didn’t show up visually as much as I wanted it to. So I used some brown antiquing effect to make the arch shape pop out a bit more.

Tip: You can run scrapbook paper through a printer to layer more design elements on it!

I decided to layer some scripted words — a Tamil love poem script — on the blue paper that filled the arch. I cut the paper to 8.5 x 11 so it would fit in my printer. I created an 8.5 x 11 file in Photoshop. In Photoshop, I placed the Tamil love poem where I wanted it to print on the paper. If you don’t have Photoshop, you can do this in Word. Then I simply put the scrapbook paper in the printer, and printed the Tamil script poem onto the scrapbook paper. Easy!! You could use this idea of printing onto scrapbook paper to create lots of layered effects. With a color printer, you can print text or other designs in any color. Just keep in mind that if you’re printing on colored paper, the color in the paper will change how the color of your ink looks. It might be good to print samples first.

At first I wasn’t going to use glass, thinking the artwork might have the effect of canvas. But instead, it felt unfinished and unpolished. So I got a 14″ x 22″ piece of glass cut to fit. I got the glass cut at Hobby Lobby for a reasonable $20. I was glad Hobby Lobby was reasonable, because glass costs a lot more than that at Michaels and JoAnn, and I didn’t have time to research a specialized glass supplier.

For a professional finish, I even glued brown paper over the back.

Finally, I attached an English translation of the Tamil poem on the back of the frame.

After a wild and crazy trip trying to find the right inspiration, the collage was finally done!

And now, I am getting more visions of things with arch shapes … there’s something about the promise of a world glimpsed through and beyond a magnificent Mughal arch …