In the previous post, I shared a super fast and easy tutorial for making scrapbook paper Christmas tree ornaments. Simply trace a paper mache ornament on scrapbook paper, cut the paper and glue it on. Sounds simple, but if you choose a fabulous paper, it can look like much more work than it really was! Like this ornament I made:

Add rhinestone embellishments to make it fancy. Check out the tutorial for some useful tips about how to glue scrapbook paper — I’ve had problems with wrinkling in the past but found a good solution.

Today, we’ll talk about adding another layer of pattern with painted stencils. If you want to stencil on scrapbook paper, I recommend choosing a lighter paper with a more subtle pattern like this paper: 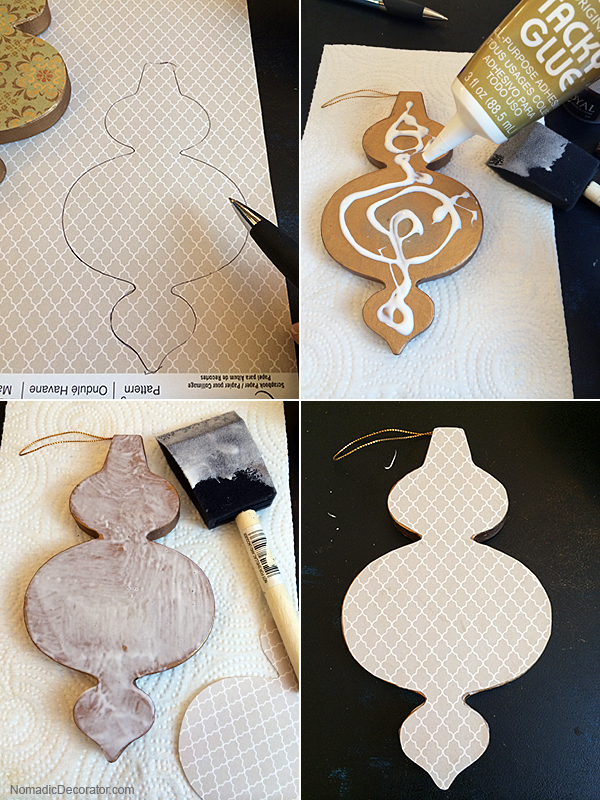 Your ornament doesn’t have to be beige! In fact that’s not very Christmas-y, is it? I think it worked for me because I’m using metallic paints and those can always be made to look festive. You can choose any lighter color. You just want to be sure there’s some good contrast with the stencil color, and it’s easier to paint a darker color on a lighter background.

Next, choose a stencil. You can use a Christmas theme stencil. You don’t have to though. I’ve built up a collection of stencils, as a contributor for the stencil company Royal Design Studio’s blogzine of stenciling ideas, called Paint + Pattern. So I used Indian, Moroccan, Turkish, all kinds of stencils to paint patterns on my ornaments. Think a bit outside the box. You don’t have to use a super small ornament-sized stencil. Those are hard to find, anyway. You can use part of a bigger stencil, like I did here: 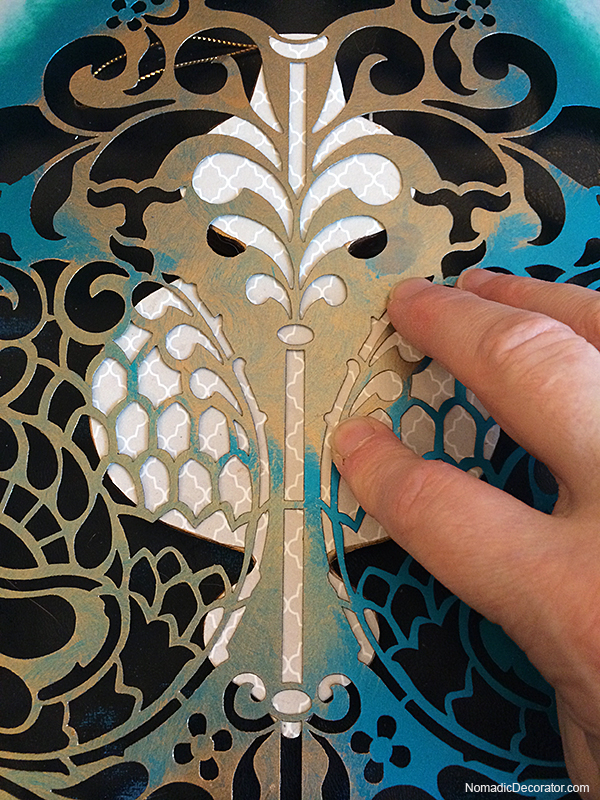 This stencil is actually really big. The ornament fits only a very small part of the stencil design, but that’s okay, it gives you a really cool abstract pattern. (And you can see I didn’t clean it before using it again! Oh well.)

Here you see while you’re painting the stencil, much of the paper pattern might get covered up with paint, but don’t worry: 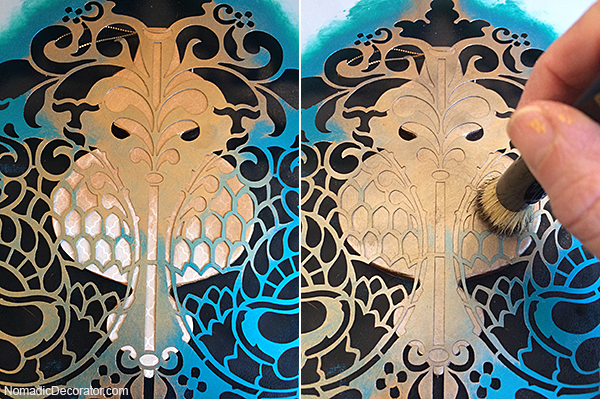 The pattern will peek out when you’re done: 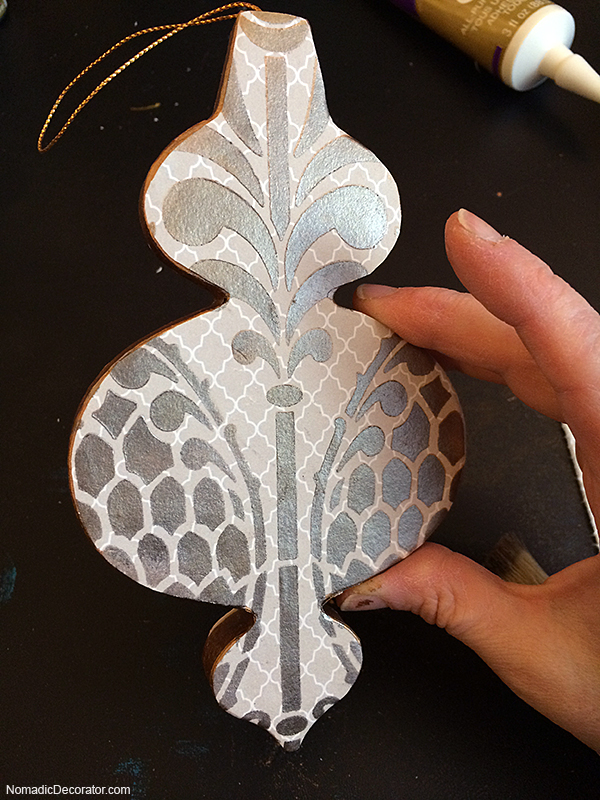 It’s hard to see there, but I swirled several metallic colors through the stencil – silver, bronze, gold. The color changes depending on how the light hits it.

Have fun mixing and matching different colors and patterns. Here’s a collection of ornaments I made in an afternoon, some with just a painted base on the paper mache instead of scrapbook paper: 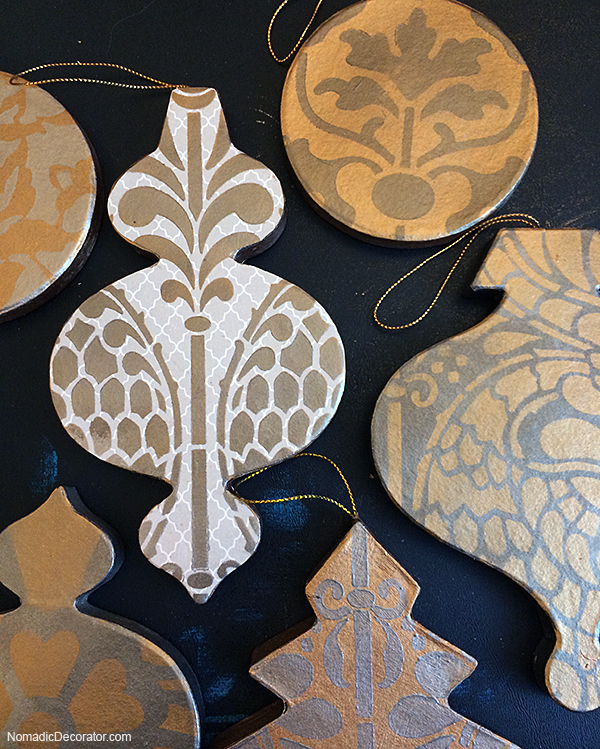 You can see here I decided to add some colored rhinestones: 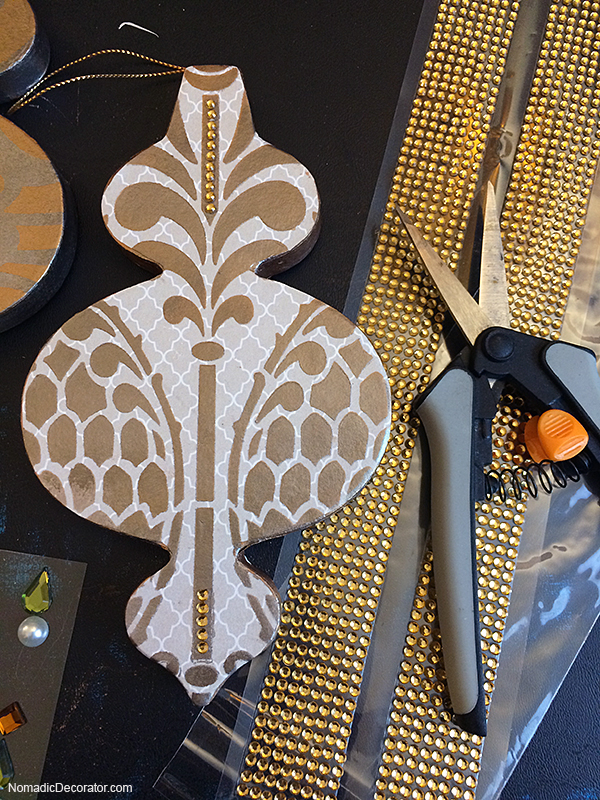 You can find sheets of rhinestones like this in scrapbook supply aisles at craft stores.

My sister brought her Quaker parrot to my house for Thanksgiving and here’s the parrot saying “okay” and “hmmm-mmm” to my work:

Literally. Those are among the many words she says. And she really did say “okay.”

Another way to make your ornament interesting is with contrast in texture and finish. I glued a glittery scrapbook paper on an ornament, then stenciled with Chalk Paint by Annie Sloan which has a matte finish. The combo of glitter and matte paint looks interesting. It’s hard to photograph so here they’re tilted into the sun: 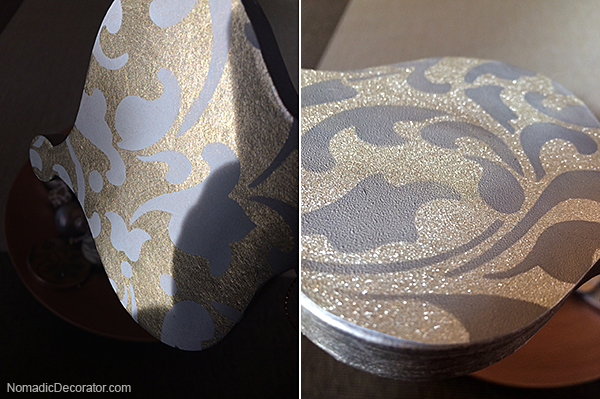 Here’s another example of placing a stencil partially on the ornament, and the pattern result: 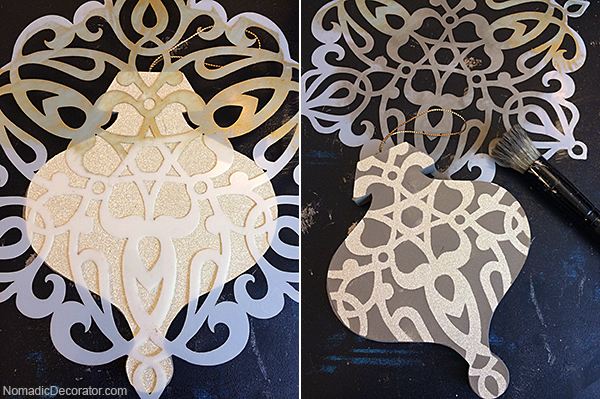 Here’s a mix of stenciled ornaments and ornaments decoupaged with scrapbook paper, to show the huge versatility even with a limited color palette: